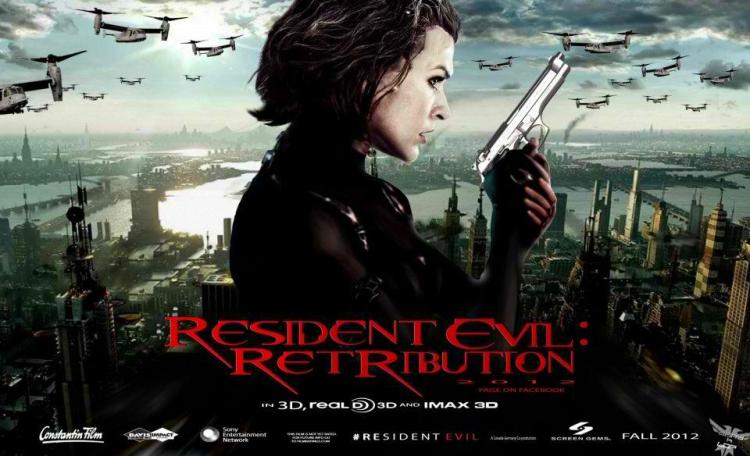 Coming back to the Cineplex, from Allliance films, this weekend for the 4th follow up to 2002’s Resident Evil, Resident Evil: Retribution goes back to its roots. Writer/Director Paul W.S. Anderson brings back characters from all of the previous films, including Michelle Rodriguiez’s Rain from the first film, and this time around takes us to the iconic Racoon City. But will this Resident Evil be the fun joyride of the first or continue the lacklustre trend of its follow ups?

Retribution starts directly from the end of Resident Evil: Afterlife with Alice (Jovovich) managing to escape the carnage of the incoming onslaught at the end of Afterlife, only to end up in The Umbrella Corporation’s custody, barely alive and breathing. The Umbrella Corporation’s deadly T-virus has continued to ravage the Earth, transforming the global population into legions of the flesh eating undead. Alice awakens in the heart of Umbrella’s most clandestine operations facility and promptly escapes her containment cell with the help of Ada Wong (Li) and another mysterious new ally. Ada and Alice must fight their way through the Umbrella complex, with foes new and old blocking the way, to meet up with the escape team waiting to break them out that includes fellow Afterlife survivor Luther West (Kodjoe). The complex is a series of testing scenario stations inhabited with the many clones of Alice and Rain (Rodriguez) among others. Leading the charge against Alice is Jill Valentine (Guillory), Alice’s former ally who has now fallen under the influence of the Red Queen. The insanity continues as Alice and crew fight of the hordes of the undead in 3D.

Never one to be afraid to go completely over the top in action and effects, Director Anderson does not disappoint his fans here as the insane opening sequence is first shown in slow motion reverse and then replayed back in real time. The sheer amount of violence in the first 15 minutes is quite impressive. Retribution in many ways is a remake of the first Resident Evil as it takes place almost entirely in an underground Umbrella facility and Anderson uses similar camera techniques and schematic representations to jump between areas in the facility much like he did in the first. This time Alice is saddled with one of her clones (daughters) Becky (Engineer) in a homage/rip-off of the Newt/Ripley story from Aliens. Feeling overly obligated to the girl, Jovovich’s Alice at one point goes to extreme measures to protect her, another scene extremely reminiscent to the aforementioned James Cameron masterpiece.

Sadly the entire film feels too much like a retread. Jovovich is obviously comfortable in this role, having done it four times before, but the script lets her down on this one. It is fun to see Rodriguez in this world again and her character in the script may be the most fun outside of the underutilized Kevin Durand, who plays the new character Barry Burton. Retribution does little to expand on the world the previous films have built, in fact it seems to revel in the fact that they are staying in familiar territory. And based on the blatant open ended conclusion of the film, the only reason Retribution is being presented to us may be to set up the next film which apparently will be the final blowout.

Feeling very much like a case of déjà vu, in 3D no less, Resident Evil: Retribution does little to expand on its predecessors. The bombastic style that has permeated the series is here by the bucket loads, so defenders of the series will probably enjoy it. That said it does not carry enough for me, even with Rodriguez and Durand, to give it any more than the slightest of recommends.