From Anchor Bay Entertainment and Starz Network in the US, The Movie Network for us up here in Canada, comes the long awaited second season follow up to Spartacus: Blood and Sand, Spartacus: Vengeance. After the illness that sadly took the life of season one star Andy Whitfield, and the prequel production Spartacus: Gods of the Arena, Liam McIntyre steps into the sandals of our lead Spartacus and throughout the course of the season leads a furious bunch of rebels out for revenge against the Romans after events of season one. But is McIntyre capable of taking over the iconic role?

After the bloody escape from the House of Batiatus that concluded Spartacus: Blood and Sand, the gladiator rebellion has erupted and begun to strike fear into the heart of the Roman Republic. Praetor Gaius Claudius Glaber (Parker) and his Roman troops are sent to Capua to crush Spartacus’ (McIntyre) growing band of freed slaves before they can inflict further damage. Spartacus is given a choice between satisfying his personal need for vengeance against the man who condemned his wife to slavery and eventual death, or making the larger sacrifices necessary to keep his budding army from breaking apart. Spartacus is joined by Crixus (Bennett) and his band of Gauls, united by their mutual hatred of the Romans, that join his loyal group of rebels including his right hand man Oenomaus (Mensah) and his now lover Mira (Law). Meanwhile Galber and his scheming wife LLithiyia (Bianca) discover the former wife of Batiatus Lucretia (Lawless) alive and well, yet apparently unable to remember the previous events. 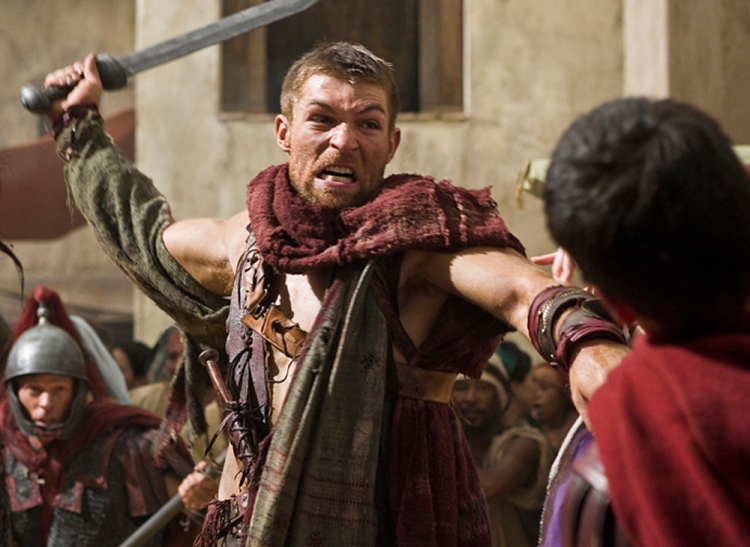 Known for its bombastic nature including epic battles doused in buckets of CGI blood with rampant nudity/sex and the campiest of dialogue, season 2 of Spartacus does not stray from the formula that made it a smash hit in its first season. This is the same hyper stylized, Spanish TelaNovella-styled, brattier younger sibling of HBO’s Rome that it always has been. The script is written with built-in camp value and tongue firmly planted in cheek. The acting is over the top and downright goofy in parts, but absolutely works within the context and tone of the series. McIntyre actually does admirable work here in taking over the role vacated by the untimely passing of Whitfield. His portrayal of Spartacus still brings the gravitas that shows why these men follow him to the ends of the earth. Bennett does solid work as Crixus and Lucy Lawless is a scenery chewing machine every time she appears on screen. This surely is not a family friendly atmosphere, thanks to the copious amounts of sex and violence, but serves its purpose of adult fairy tale very well; think 300 meets Fifty Shades of Gray. The cinematic camera work and production value only adds to the attraction, no expense seems to have been spared in realizing the series for the screen.

The Blu-Ray is packed with special features including multiple audio commentaries with cast and crew, behind the scenes specials and a blooper reel. The specials include a Starz produced studios series recap  and a making of, Behind the camera featurette as well as a on the set with star McIntyre. A featurette on the special effects and a sneak peak of the follow up final series Spartacus: War of the Damned. The Blu-Ray also features the extended versions of episodes from Vengeance, all in a impressive haul of extras.