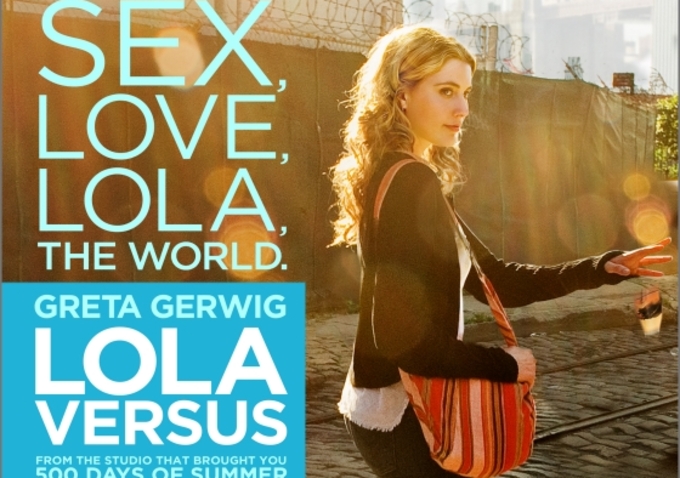 Currently one of Hollywood’s latest “IT” girls, the talented Greta Gerwig steps into one of her first starring vehicles in the new Blu-ray release from Fox Entertainment, Lola Versus. The story of an about to be 30 year old that goes through a life altering situation was written by co-star Zoe Lister-Jones and Director Daryl Wein seemingly with Gerwig in mind as it seems to be tailor made for her brand of “dramady”. But is Gerwig ready to be the main attraction?

When 29-year-old Lola (Gerwig) is dumped by her fiancé Luke (Kinnaman) just three weeks before the wedding, she embarks on an emotional, year-long adventure of self-discovery. Guided by the advice, good and bad, of her close friends Alice (Lister-Jones) and Henry (Linklater) and eccentric parents Lenny and Robin (Pullman and Winger), Lola’s chaotic journey takes her through ill-fated flings and mental breakdowns. As Lola progresses, claiming that she has moved on yet continually falling back to Luke, she slowly starts to realize that she has to spend more time dealing with the most important person in her life, herself.

Lola Versus suffers from what a lot of other films in the “chick flick” genre do, the script. A lot of the typical clichés are here, the oddball best girlfriend, the male good guy friend that despite being “family” leads to one of her ill-fated affairs. We also get the fiancé who comes crawling back claiming he’s made a huge mistake and the flaky parents who seem to wander in and out of the story. On the positive side we have Gerwig, Greta is talented enough to elevate her surroundings and dialogue to create a watchable and believable character. She truly is one the actresses to keep an eye on right now and I personally look forward to seeing what she has to deliver next. The rest of the cast is decent enough, Pullman and Winger have very little to work with here, but there is one glaring problem: Lister-Jones unfortunately did not stay behind the camera, but hopped into the best friend role instead, and the film suffers for it. Lister-Jones seems to have written herself a role that she is completely unsuited for, or perhaps she is better writing than performing, because her performance does not work at all. Her Alice comes off as cloying, fake and downright grating. The setting of New York conveniences the script by allowing Lola’s antics to be more accessible to arrive at, and Lola does not live on some upper west side condo that’s well out of the price range for the character, but a modest apartment that she has to kick her sublet-er out of to move back into. These are the touches that work.

The Blu-Ray is loaded with special features including deleted scenes with an alternate ending and outtakes from our stars, two Fox Movie Channel featurettes including an “In Character” with Gerwig and another entitled World Premiere, two more featurettes and an audio commentary from our co-writers Director Wien and star Lister-Jones. The fetaurettes are all fun to watch, especially the Gerwig centered ones. The deleted scenes and outtakes don’t do much to expand on the film and the alternate ending was better left on the cutting room floor.

Ultimately Lola Versus comes down to Gerwig’s performance and likeability in the lead role as to whether it will be a film that you will enjoy. That said, as much as I like Gerwig, her performance is not enough to make the film work, Lola Versus is a mild non-recommend.

One thought on “Lola Versus Blu-Ray Review (Kirk Haviland)”