I have to admit that I had certain expectations about how much I would like The Master. The muffled thumps and percussion of Jonny Greenwood’s score accompanying handfuls of teasers promising the greatest movie ever made. The accolades and critical acclaim from Venice and here in Toronto. But there’s also the devil’s advocate in my head or on the internet pointing out that The Master’s director, Paul Thomas Anderson, is becoming as misanthropic as his recent protagonist, Daniel Plainview. The worst case scenario is that he’s magnifying on the myopic masculinity that is my least favourite part of There Will Be Blood. And the first scenes almost confirm that, with WWII soldiers galore, our shaky protagonist Freddie Quell conspicuously making trouble among the men. Then there’s a scene with him submerging within a deeper part of the ship where he works, the red lighting in that scene hints towards a more diverse colour palette that reminds me of the images within his earlier work, Boogie Nights.

Then comes a scene that almost made me declare this movie’s greatness, starting out with a close-up of a young woman photographed by Freddie who is, immediately after the war, a glamour shot photographer at a department store. She’s a part of a montage of all-American white faces accompanied by Ella Fitzgerald’s rendition of Irving Berlin’s song “Get Thee Behind Me Satan.” I can talk about this scene or this shot so much, its Busy-esque air, its gushing romanticism missing from the otherwise superior There Will Be Blood. I had doubts on being bamboozled by Anderson’s period touches. But while other directors might sloppily handle their depictions of the past, he does it with specificity and love. This isn’t necessarily a qualm, but Anderson should have just cast one star and the rest are character actors with the same imperfect yet happy faces, waiting to be discovered. 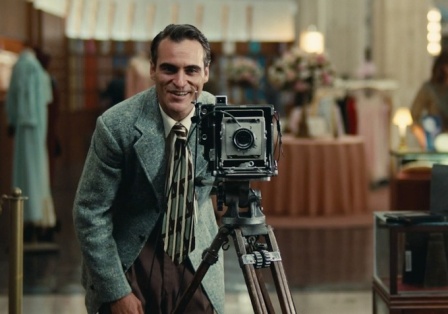 The department store also reminds me of the contrast between its well-to-do customers of peacetime and another montage showing the soldiers who have defended them. The woman’s imperfect patrician nose is given this veneration while the soldiers’ roman noses, bulging eyes and gaunt faces are used as evidence of them as freaks who need to know how to act in the real world. It’s as if the ‘real world’ is more fantastical than the isolating one that war produces, or that the woman is a symbol of reintegration and the man as leashed animals, both polarities that we’ll see for the rest of the movie.

There are a few more things to cherish within this movie. Freddie’s post-department store stint, working with Filipino farm workers (Wat did you gib him?), this borderline stereotypical representation of my people seeming like Anderson knows his way to my heart. Watching this movie would have doubled my Filipino content at this year’s TIFF. There’s the weird kid from The War at Home (Malek) who’s marrying the daughter (Childers) of the movie’s titular Master, Lancaster Dodd (Hoffman) – on a yacht! There’s also the first and second “processing” sessions between Freddie and Lancaster, the former’s teary-eyed confessions freeing him from becoming the slouchy caricature who he could have been. These are one of the few different forms of “processing” that’s a regular part of Lancaster’s cult called The Cause, Anderson portraying the ritual as magically as he could, depicting it with respectful deference as if it was an aspect of an actual religion. And Laura Dern, who’s relaxed this time around!

And of course, the complementary tension of performances anchoring most of the movie. At first glance Hoffman, the most consistent, is my best in show but there’s so many ways to judge what ‘best’ is. Phoenix, the most physically committed, and Adams as Dodd’s wife Peggy, the most surprising, the ruthless face of civilization, have their legitimate claims to their audience’s attention. Dern and Malek make up for capable fourth and fifth wheels but that’s stemming from my own biases towards those actors.

The movie has an unholy triumvirate representing strong reactions towards belief systems clashing with modernity, their presences promising an operatic dénouement. And we know that Anderson knows how to write those kind of endings – Alfred Molina’s one scene in Boogie Nights, the dark skies of Magnolia, Daniel Plainview’s outbursts in There Will Be Blood. But it unfortunately doesn’t happen in The Master and here’s why.

What we have in its centre is a man who comes short of (self-)awareness, and his manipulative and popular mentor. In other words, this movie is about the difficult relationship between two dudes who prefer to take part in horseplay, passive aggressiveness and lectures of cognitive dissonance instead of real, clear communication, which most movies need, especially this one. There’s a scene in the movie that could have marked the end but it just went on and on and on.

I get the point – the movie has to be about Freddie, a person who subscribes to belief systems not because of faith but because he’s lost. The kind of character who still holds on to some of a cult’s rituals despite of how his relationship towards that group evolves or devolves. But I still wonder what would happen if the movie’s perspective focused on the master instead of his servant. But then Lancaster doesn’t reach out enough to Freddie the same way that Dirk Diggler, Frank Mackie and Daniel Plainview do to their de facto families. And this sort of cold distance and restraint is what keeps the movie from becoming truly satisfying.