New on DVD from Anchor Bay Entertainment Canada, is an MMA inspired fight film that explores the seedy side of underground fight clubs, Brawler. Based on a true story, the familiar tale of brother versus brother, realized most recently onscreen in last year’s Warrior, is familiar ground. The real test of the film will be if it can deliver a realistic product inside the cage.

Brawler is the tale of two brothers, Charlie (Grubbs) and Bobby (Senter) Fontaine, who find themselves in a vicious, bone-breaking, jaw-smashing underground “fight club” circuit under Mafia control set on the riverboats of New Orleans. Sidelined by an injury incurred while protecting his young brother, Charlie is blindsided after a devastating betrayal by Bobby and his new wife Kat (James). The two brothers return to the underground fight club scene in New Orleans and prepare to battle each other to the death. 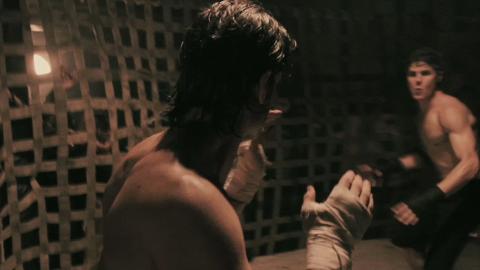 The scenario is hardly new and the script really does not do anything fresh here to spruce it up. The dialogue is pretty pedestrian as well, but that’s hardly why we are here. The fight sequences actually work fairly well. You can tell Grubbs and Senter have done their homework as real MMA techniques and holds are used and mixed in with traditional movie fight punches and kicks pretty seamlessly. The fight scenes are by far the highlight in the film. The rest of the film unfortunately falls flatter than a ruined soufflé. Grubbs seems to have all of his charisma in the ring and none outside. But even he comes off better than Senter, who apparently feels acting like a drunken frat boy with a mischievous grin constitutes depth of character and range. While I see, with coaching, a possible future for Grubbs, Senter seems doomed to a straight to DVD string of follow ups. James and Bowen both really have nothing much to do here. James’ cocaine and substance addicted Kat could have been an interesting character to delve into but the film barely scratches the surface. Setting the film in New Orleans brings a certain level of griminess to the film, but also leads to many awkward cuts with inappropriate music cues forcing in Zydeco music to constantly hit us on the head that we are in New Orleans.

The DVD comes equipped with a trailer only. The disc itself suffers from a volume fluctuation that could very easily have been the fault of the filmmakers and not the authoring. The volume of dialogue is a mere whisper between the jacked up music and fight sound effects. The sound fluctuation had me adjusting the volume throughout the runtime of the film.

While I will give Brawler kudos for coming up with effective fight sequences the rest of the aspects of the film simply do not work. Sadly Brawler is a non-recommend.