I read Stephen Chbosky’s The Perks of Being A Wallflower, the source material to the movie of the same name three years after it was published. So the memories of the book to me, which I read a decade ago, was hazy. Charlie (Lerman) to me was a kid surrounded by adults or younger versions of adults. He has a slightly acrimonious relationship with his sister (Dobrev), watches seminal television with his family (parents played by McDermott and Walsh) and has fond yet guilt-ridden memories of his dead aunt Helen (Lynskey). Because of having hospital trouble in middle school he has trouble finding friends. That’s until he found a group of the titular wall flowers like Sam (Watson) and Mary Elizabeth (Whitman) teach him the ways of Pearl Jam. Although he learns about himself in other ways, like his scientific yet exalting description of masturbation. He’ll fall in love with them and get in trouble with that and then get reintroduced with them again. And then I discovered real literature and the E! Network and I became an ironic hipster and am a lesser person for it. But Charlie keeps coming back to me in times when expected progress gets hindered by regression, just like his unnamed mental disorder that keeps returning and making him see things because he can’t resolve his past the way I can relate to.

So my first question after coming out of the movie was – where was Pearl Jam and grunge? Why are the cool kids like Sam and her gay step brother Patrick (Miller) dancing to Come on Eileen and deriding Bust a Move? Chbosky adapts his own novel for the big screen yet I still feel a disloyalty to certain aspects of his own subject. It’s like I know I’m watching a better example of a suburban teen drama but it still has to bear certain motifs of the genre. I understand these concessions. In return we have more pleasant versions of adolescent subcultures. Instead of smudged zombies, his goths look sleek and androgynous, Whitman for example performing the role as if Mary Elizabeth is a normal girl who happens to like The Rocky Horror Picture Show instead of letting her interests affect her persona.

Speaking of Mary Elizabeth, this adaptation also takes risks with casting, but that doesn’t mean they don’t pay off. The most convincing adults are Lynskey, who has played middle American women for a few years now, and Rudd, who plays Charlie’s teacher and reminds us that he can be lovable even in a platonic, mentor-ish way. Joan Cusack makes a cameo as Charlie’s doctor and it’s strange to watch her seem normal. Walsh and McDermott look more like a couple who adopts at 45 instead of having their own kids at 25 but you know Hollywood. 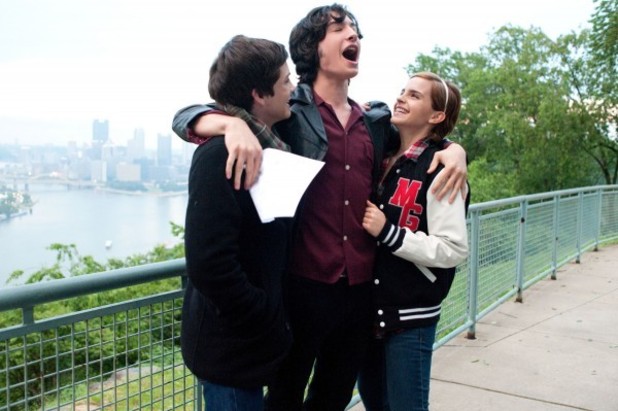 While reading the book I imagined a boyish freshman included in this drum circle of willowy semi-adult seniors. Instead, almost all but two of the younger cast seem like they could be the same age. One is Dobrev who has played a senior for the past half decade or so of her career. The other is Miller, whose lanky physicality reads as someone older than the rest of the kids. But the latter is an interesting case, since Patrick does have the same maturity level as the other wall flowers. And Chbosky knows that Charlie, who already knows the cracks within his family, needs to see the said maturity – or occasional lack thereof – of his older friends, so that he won’t perpetually go into hero-worship with them. As he ingratiates himself within the wall flowers he needs to see them and be seen by them as equals. Despite the alternative music and wise cracks he eventually discovers his friends’ woes. The young cast fires off at different times of the movie. There are some who instantly click, like Whitman. Others eventually prove their place in the movie, like Johnny ‘HFS’ Simmons whose perma-scowl convinces as a jock burdened with macho expectations, Miller who brings subtle amounts of laughs and sass to the group’s dynamic, and Dobrev IS the big sister to the rescue. Watson’s accent work is a bit off and might never be as good her Hermione but she makes a capable crush subject.

Since we’re already talking about cast, the most important piece in this puzzle is Lerman, whom I’ve only seen as the cocky D’Artagnan in The Three Musketeers. The first moments don’t necessarily show the exact opposite of that, and by looking at him I don’t get a teenager but strangely enough I see someone who’ll blossom as a man. These qualities are great for climbing a Sisyphean mountain, because we need to see an actor who we can have a puppy crush on, can say something mean without being mean, and can throw a punch, instead of someone more clownishly vulnerable. And with payoffs his performance in the last scenes are the most rewarding, the camera cutting and weaving through his jagged trauma. Despite Chbosky scrubbing the dirt and profanity off his own material, these last scenes take us to a movie that’s as dark in different yet equally cathartic ways as the book is.