Now available on Blu-Ray and DVD from 20th Century Fox is the quirky comedy from writer/star Zoe Kazan, Ruby Sparks. Zoe, granddaughter of prolific director Elia Kazan, is following in the footsteps of her parents by writing Ruby Sparks.  Yet when it came to directing the film she was more than happy to let the tandem of Jonathan Dayton and Valerie Faris of Little Miss Sunshine fame take the lead. It’s been six years since Dayton and Faris stormed the indie scene with the runaway sensation of Sunshine, will Ruby Sparks make that six year span without a follow-up worth the wait?

29 year old high school dropout Calvin, who at 19 wrote a ground-breaking novel, lives a solitary existence in a giant house struggling to write his follow-up. On the advice and orders of his therapist (Gould) Calvin is assigned something to write and that night he dreams of a girl named Ruby (Kazan). Immediately inspired Calvin begins writing a new tome based on a supposed love story between Ruby and himself. His brother Harry (Messina) asks where the book is going and warns him that he’s written his ideal of a girl, but not a real person with his manuscript. Calvin awakes one morning to discover Ruby standing in his kitchen preparing breakfast, completely unaware she has sprung from his imagination. Ruby is the “Manic Pixie Dream Girl” he has always fantasized about and this leads him to decide he will never write about her again, until she develops ideas and needs of her own. Calvin does what he swore he wouldn’t and starts rewriting their relationship, and Ruby herself. Of course things go drastically wrong and the real question becomes can Calvin let go of his controlling ways to allow someone else to exist, either in his life or on the page. 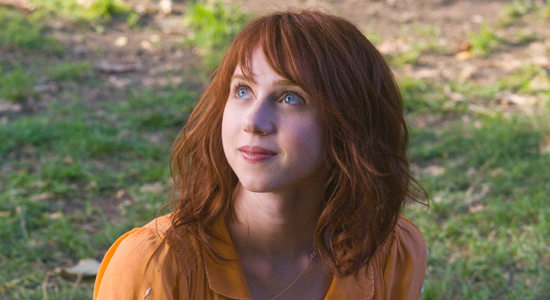 Ruby Sparks manages to assemble a great amount of talent behind and in front of the camera. Upon a second viewing the inspiration drawn from Marc Webb’s 500 Days of Summer and Michel Gondry’s Eternal Sunshine of the Spotless Mind becomes even more evident. Kazan’s smart script never becomes trite and pandering like some similar films tend to fall prey to, yet like the aforementioned films it stays the course and proves worth the journey. Paul Dano is fantastic here as Calvin, the awkward introvert faced with the gift of a lifetime that can’t seem to find a way to change his structured/controlling ways. Calvin’s Mother (Bening) and Step Father (Banderas) are the free spirited artistic type of people that served as inspiration in his writing of Ruby, yet he cannot get along with them. Kazan’s Ruby is the girl that Calvin has dreamed off, but she also has her own personality, goals and dreams. What could have been a one dimensional caricature becomes an intense and intimate portrayal in her capable hands.

Ruby Sparks also gets dark, real dark, in its 3rd act and to the credit of directors, Dayton and Feris, they do not let any of the dark scenes pass without impact. The inevitable scene where Calvin comes clean is particularly rough, and it’s never treated as flippant as actions and their implications are painfully played out. The ending is not completely satisfying if not predictable, but it’s far from enough to ruin the overall effect of the film.

The Blu-Ray is very limited on special features coming with 5 featurettes that total less than half an hour in length. The lack of a commentary track here is disappointing as both real life couples of Dayton and Feris and Kazan and Dano would most likely prove a fascinating listen. The featurettes being as short as they are only skim the surface of the production, but are fun none the less.

A film that survives multiple viewings, Ruby Sparks is the best type of romantic comedy, one that challenges the conventions of a relationship without resorting to typical conventions. Ruby still delivers on Blu-Ray and is a solid buy.