The closing night film from this year’s Toronto After Dark Film Festival was the Spanish horror comedy ‘Lobos de Arga’. The translation literally meaning Wolves of Arga (pronounced r-e-ah) but retitled Game of Werewolves for the international market. Game is throwback film. Wearing its influences like a badge on its chest, Game is clearly inspired by the Universal Monster films of old and more modern masterpieces like An American Werewolf in London and The Howling. The only question remaining is does it belong in the company of these classic films?

In the remote countryside of Galicia, Spain, the townspeople of Arga have suffered under a gypsy curse for 100 years. A treacherous woman’s unborn son was cursed to become a werewolf every full moon and ravage the town. Now the curse might finally be lifted when local boy Tomas (Otxoa), returns to the village looking for inspiration to write his new novel. Tomas, unbeknownst to him, is the last of the lineage to the cursed woman and if bitten will lift the curse. So instead of peace and serenity, Tomas ends up running from the locals and accidentally releasing the dreaded beast. While the villagers try to kill the monster, Tomas and his friends attempt to end the curse on their own, with hilarious and dire consequences. 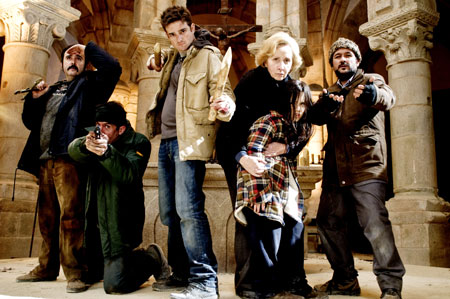 Game of Werewolves is one hell of a fun film. The script is smart and concise with little wasted action. We start realizing right away that there is something else going on here and that Tomas has returned under false pretense. The performances from our lead trio are great. The comedic timing between the three is sharp. The location in the Spanish countryside is gorgeous and the buildings and set design help lend a classic feel to the proceedings, the film almost looks like it was literally ripped out of classic Universal monster pic. Almost all the effects work here in a glorious example of why practical effects work better for werewolves than most of these CG creatures we get today. Clearly inspired by Rick Baker’s work from Werewolf in London, the transformation sequences feature the protruding and changing body mass along with the creaking and crunching of bone that Baker’s work in London is famous for. Director Moreno shows a steady and adept hand behind the camera, crafting a theme park amusement ride of a film that is fun from beginning to end.

One thought on “Toronto After Dark 2012: Game of Werewolves Review (Kirk Haviland)”