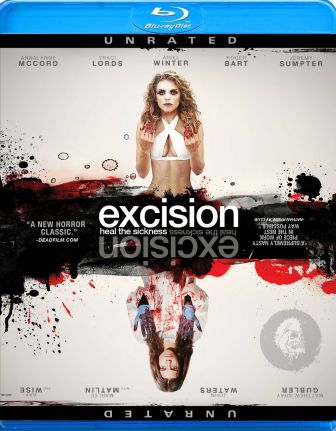 New on Blu-ray and DVD from Anchor Bay Entertainment comes the bizarre medical based thriller, Excision. On the surface the film shares a lot of similarities with the body modification horror film from the Soska Sisters, ‘American Mary’, but upon closer examination the two are very different. The Soska’s Mary is an overachieving and talented student while McCord’s Pauline is the ultimate slacker. So how does Excision stack up?

Pauline (McCord) is an 18 year old failing student with aspirations of a career in medicine. She fantasizes and is sexually stimulated by visions of performing surgery on her classmates and herself. Pauline’s younger sister, Grace (Winter), has cystic fibrosis and is the main concern of their parents (Lords and Bart). Pauline decides she wants to lose her virginity to one of the popular boys in school named Adam (Sumpter), and surprisingly Adam obliges. After the non-subtle Pauline causes the break-up of Adam and his girlfriend, Adam’s now ex and her friends vandalize Pauline’s family home. Pauline goes on an angry tirade at school, pushes Adam to the ground and slams his ex-girlfriend’s face into her locker which causes her to be outright expelled from school. This seems to set Pauline off the deep end as she decides she must pursue her potentially lethal dreams all the way, leading to a deadly outcome.

Excision is a smartly written and executed film that almost succeeds in delivering the goods. McCord’s performance is solid. She delivers a sullen, remorseless and goofy performance that works for most of the film. Lords and Bart are your typical demonized parental unit, they both still perform admirably with what they are given, though the dialogue given to Lords especially helps to lessen the cardboard cut-out feeling of the performance. The rest of the cast is really not given a lot to do here as the film rests mainly on the shoulders of McCord.  Most of the dialogue here strikes like a cross between Diablo Cody and Noah Baumbach, which is great in parts and a hindrance in others. Unlike ‘Mary’, where the surgical references and scenes are well researched and feel completely authentic, Excision is more concerned with shock and awe tactics and couldn’t care less about authenticity. The production is slick and the film looks great. Many of Pauline’s fantasy sequences are gory delights that will satisfy most genre fans. The biggest issue of the film is the end. In a either love it or hate it moment things go ridiculously wrong and even though she has been fantasizing about certain things throughout, you never quite get to the point where you believe that Pauline will go as far as she does. So because of this the end feels a bit forced and out of character.

The Blu-Ray is a bare bones disc without any special features attached, except for an audio commentary track with the director and star McCord, but the transfer looks and sounds great as the film’s colors are vibrant and loud. Sadly they have chosen a Blu-Ray cover shot that is less impactful when compared to the gorgeous theatrical poster.

Ultimately Excision is a film that toys will greatness throughout, only to be letdown by an ending that the film does not quite earn. That said, there is more than enough here to be able to make Excision a definite rental recommendation and a decent buy.