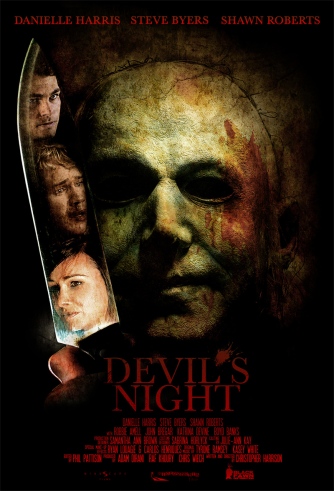 Written and Directed by Christopher Harrison

Back in 2007 Director Harrison along with his cast and crew set out to make an indie film that played as a horror homage to the films he grew up watching in the 1980’s. After filming was completed the film’s rough cut was turned into a feature that was edited, marketed and released under the name Left for Dead. After a five year wait while other projects took precedence and the film was shelved for a bit, Harrison has finally delivered his final version of the film, Devil’s Night. Devil’s night made its Toronto theatrical premiere at the Blood In the Snow Canadian Film Festival this past weekend.

The College students of a nondescript Canadian town throw wild parties full of drugs, sex, and lost inhibitions every year on Devil’s Night. But this time, an uninvited guest comes for a visit. A year prior five Frat boys were involved in a terrible accident and made a horrific decision. Now a year later the boys are being stalked by a machete-wielding maniac, and their friends are slowly disappearing one by one. It’s up to Tommy (Byers), his girlfriend Nancy (Harris) and best friend Clark (Roberts) to stop the killer before he exacts revenge on all of them.

Devil’s Night is a loving homage to the films of the 80’s like Friday the 13th and Night of the Creeps to name a few. Harrison has written a fun script that is content to stay in this little pocket, with its limitations and inherent plausibility issues intact. But it’s because he does stay in this pocket that director Harrison manages to deliver a fun and satisfying film. Byers is passable as the accident prone and paranoid Tommy, he manages to pull you in enough that you can remain invested in his outcome.  Danielle Harris is quite good here and her level of experience shines through in her acting choices. Roberts is sadly not given a lot to do in the obviously doomed best friend role, but he manages to elevate past it enough to deliver a likeable performance. The rest of the cast are mere background players, Boyd playing the way too obvious red herring character of a local serial killer on the loose from the law, but Amell manages some decent time. 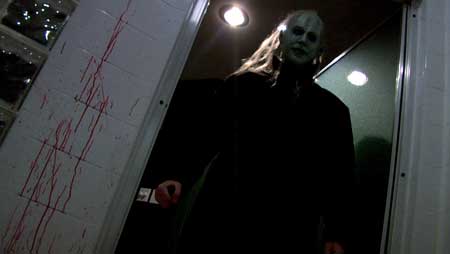 The death sequences are hit and miss here, some of the direct homages work fantastically, a particular sequence based on an iconic Friday the 13th moment involving Roberts and the stunning JaNae Armogan works extremely well. But the opening sequence involving the incident that sets of the actions of the film is less impressive. The ending sequence actually is completely flawed logic as the passage of time is supposed to be a full year, which does not explain a certain character’s appearance. Stylistically the deaths look great and the effects work is sharp. The mask used for our killer, while obviously referencing Halloween’s Michael Myers, is actually really effective as it always appears to have a smirk or grin implying that he is really enjoying his work. And the stringy long hair attached to the mask lends to the aesthetic.

While far from a perfect film, Devil’s Night results in a fun little romp that can be easily digested and retains an inherit re-watchability. Harrison wears his influences all over the screen and we can be very happy for him and ourselves as the audience alike that he has been able to finally bring his vision of Devil’s Night to the screen. Devil’s Night is a recommend.