Back for their third outing are Greg, Rowley, Fregley, Greg’s brother Rodrick and the rest of the family for Dairy of a Wimpy Kid: Dog Days. The new release from Fox Home Entertainment is aimed squarely at the teen and preteen set, focusing on physical humor and teaching a lesson or two. But is there enough in the film for the entire family?

School’s out and Greg (Gordon) is looking forward to enjoying the best summer of all time.  But when his dad (Zahn) decides that some father-son bonding is in order, directly opposing Greg’s plans for video games and hanging out with the girl of his dreams Holly (List), Greg must do everything he can to keep him from ruining his vacation.  So he hatches a plan to pretend he has a job at the ritzy country club that his best friend Rowley (Capron) takes him to. But Greg’s plans never go completely as planned and lead him further into trouble as he manages embarrassing mishaps at a public pool and a camping trip that goes horribly wrong. The hare brained schemes of his brother Rodrick (Bostick) aren’t helping his case to stay out of military school either. 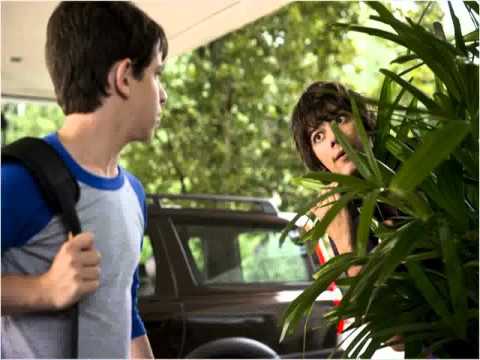 Diary of a Wimpy Kid: Dog Days sadly forgets that anyone but 8-15 year-olds are in the room as the focus is squarely upon them at all times. The gags are goofy and unimaginative, the humor is mainly slapstick and born out of goofy situations and settings. The actors are in their third go around and for the most part can perform these roles with their eyes closed. Gordon actually has some charm in the role of Greg, but the actions of Greg in the film make his character very easy to dislike, and he is our supposed to be our sympathetic lead. His lack of realization of the consequences of his actions is the main message and story of the film, but it’s because of this that he becomes someone you stop rooting for halfway through. The character’s treatment of Rowley is particularly awful and their eventual reunion is very implausible. 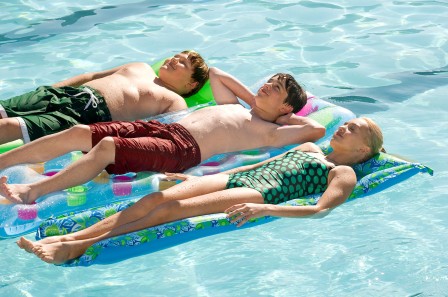 The set pieces in the film also rarely seem to work as they are over-the-top and take you out of the story. A particular sequence involving a sweet sixteen party is particularly bad. Director Bowers seems to be a follower of the ‘bigger is better’ philosophy as he keeps adding more layers of goofiness in a failed attempt to add scale to the production. The entire camping sequence comes off very poorly and the extremely dangerous nature of the sequence is ignored almost completely in favor of the slapstick resolution the script and director call for.

The Blu-Ray does feature a solid amount of special features. Director Bowers does an audio commentary for the film and we also get a moderately funny gag reel. We also get a FX movie channel featurette and an additional featurette entitled Class Clown. Finally, we get the obligatory trailer package covering new attractions and the Dog Days trailer itself as well as the deleted scenes.

With other more entertaining and family friendly currently available, like the amazing ParaNorman and the fun and endearing Rise of the Guardians, there may be better options for your money. Hardcore fans of the series will be sure to enjoy this installment, but likely a lot less than its predecessors. But the film falls flat in its efforts to entertain the entire family as most parents will likely want to leave the room. Diary of a Wimpy Kid: Dog Days is a non-recommend.