Here’s a look at some of the titles new in stores this week. 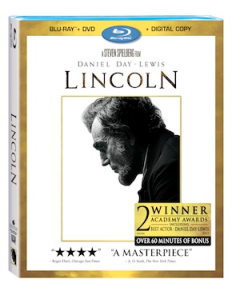 Steven Spielberg’s take on the last 4 months, and also the most turbulent 4 months, of Abraham’s Lincoln’s life and presidency comes to DVD and Blu-ray after winning Daniel Day-Lewis a well-deserved Oscar for his performance. Dealing with Lincoln’s efforts to get the 13 amendment endorsed by the House of Representatives while the end civil war also looms, and the impending peace could threaten the chance of the vote on the abolishment of slavery to go through.

Lincoln is a very script and monologue driven film that in many ways feels like a stage play as opposed to a feature film presentation. The cast is superb though, with Day-Lewis, Sally Field as Mary Todd Lincoln, Tommy Lee Jones, James Spader and the impeccable Jared Harris emerging as the standouts in a star studded package. The location and set design is also stellar and really evokes the time period and setting that Lincoln himself lived in. In the end the performances lift the film and make the effort through the dry spells of the script well worth the effort. Lincoln on Blu-ray is a recommend.

The latest from Billy Crystal and Bette Midler sees them playing babysitting Grandparents to the 3 children of their daughter Alice (Marisa Tomei) as she and her husband are out of town for his business. The children each have issues of their own as they live in an over protective environment that has resulted in a very high strung environment. The Grandparents get up to all sort of trouble with the kids resulting in bodily trauma, temper tantrums and a black eye.

Parental Guidance is a very low-aiming, flimsily scripted and tired premised excuse for a family film. Crystal is still stuck using the same schtick he has been pushing since 1991’s “City Slickers” and the rest of the adult cast seem content to phone it in. Of course the poor script should probably take part of the blame for giving them less than nothing to do. The saving grace of the film is the charming performances from the 3 children , but even that is not enough to save this film from the doldrums. Parental Guidance is a definite non-recommend.

The Lucas Star Wars Universe gets a skewering thanks to those loveable Lego’s in this brand new animated adventure. After debuting on the cartoon network the 22 minute stand-alone special comes to DVD for the first time in a special collector’s edition set with a mini Lego Darth Vader figure. The special starts after the destruction of the original death star but quickly goes array, including aspects of all of all six films. We get sibling rivalry between the two sith lords Darth’s Maul and Vader, a visit to the planet of Naboo where are heroes are washed away by the overly salivating Boss Nass and crew an even get Luke Skywalker impersonating his father all while the Emperor tries to assemble his ‘Death Star building kit’.

The writing is smart and just as funny for adults as it is children. The amount of cross movie interaction is hilarious and it’s actually quite impressive the writers were allowed to go as far as they did a familiar and protected franchise such as Star Wars. The animation is fun and as is traditional with all Lego productions everything from Strom Troopers getting blasted to ship crashing explodes into Lego blocks. And with a price point less than $10 dollars at most retailers, even the scant 22 minute run time becomes a non-issue. Lego Star Wars: The Empire strikes out is a definite recommend.

The story of a wronged man looking for revenge at the end of his fists, also new this week is the premise behind Bangkok Revenge. Manit’s (John Foo) family was killed during a home invasion and he was the only one to survive, after taking a bullet to the head no less, and is taken in by a Muay Thai master who raises and teaches him. The bullet in his brain has rendered Manit unable to feel emotions such as anger and pain which help him as he goes after vengeance from the people responsible for killing his family and injuring him.

Foo does show some talent as a fighter but the film suffers from production issues and the decision to noticeably speed up all of the fight scenes. The script is barely existent and is full of 2D supporting characters spouting clichés. Our lead lacks the charisma of a Tony Jaa or Iko Uwais and speaks with a defined UK English accent which is never explained in the film, just flimsily explained away in a running gag that does not work. Bangkok Revenge is a non-recommend.