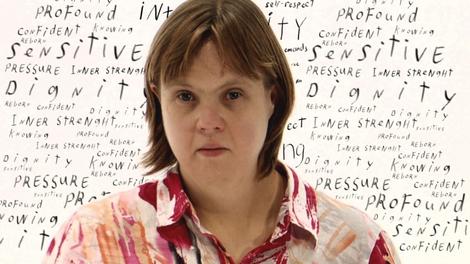 Tuesday started with a screening of the 4-minute movie Petra’s Poem, which I’m not sure can be classified as a documentary. It’s a well choreographed piece where a Petra Tolley recites her poem about having Down Syndrome and living in our society. Her words have this Kahlo-esque simplicity, but what captures me is on the screen. She’s surrounded by people like her, occasionally depicted through animation and captions that she drew herself, which reminds me that I can’t draw. The short movie’s second half is when she gives the audience her penetrating gaze, making me forget how she was born.

This is the part in my review where I should be extra careful with my words, especially while writing about people who are differently abled and comparing them to people with normal mental capacities, whatever that means. Because as with Petra it’s not as easy to see whether this or that performer of the acting troupe featured in Frog Princes are differently abled or not, which, non spoiler, they all are. There’s actually this scene when we hear the drawls within the singing voices of some of the troupe’s members performing for a pre-opening fundraiser, sounding like other great musicians would. That’s the mission statement of one of the doc’s subjects, Dr. Stephen Snow, an avuncular man with a baritone and always wearing a sartorial nightmare of a Hawaiian T-shirt. But unlike most of us, he’s helped others, founding the acting troupe to rehabilitate adults who are differently abled through their artistic abilities. His method is that of collaboration, work-shopping these adults into fashioning their own rendition of the musical The Frog and the Princess.

As expected of a movie about people of different abilities in our politically correct climate, the movie starts out as a cherubic sun fest. But the movie’s turning point comes when Stephen gets a bit stern with these kids. The deadline of their opening performance means that he’s pushing them to perfection, and it’s not necessarily the best thing for the troupe’s self esteems. We hear one of them say ‘I’m a failure,’ which is grating to hear yet makes me react and want to tell them that they’re not and they’re just having a bad minute or hour. But the actors also use Stephen’s collaboration ethos for equally forceful leverage. One actor or one of the teaching assistants asks him if he’s ok, her own subtle way of putting him in his place. Another actor, Tanya Guidon, who’s aware of her own past victimizations, becomes the troupe’s rebel, gradually shifting from tearfully fearing the script in front of her to lashing out as a cursing machine.

Although, at the risk of repeating myself, a documentary about a large enough of a population will always make me want a longer, more comprehensive group portrait of these subjects. I wanted to know about the other actors who had the great voices. Who are those two post-punk kids and what’s their motivation to help? I know their answers might be mundane but deeply I still feel like I need a confirmation of what I already know. And I do have this feeling that Tanya and another actor, Ray-Man (named after Man Ray and not who you think it is) are chosen as the focus subjects for maximum dramatic effect. As much as we feel for those people who have family and romantic issues like Tanya and Ray-Man (separately), I also just want to watch slightly boring people who are really good at what they do.