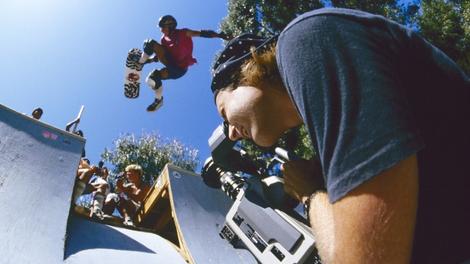 Skateboarding Pioneer and Former Z-Boy, Peralta, returns to his roots again to helm the follow-up to his fantastic documentary Dogtown and Z-Boys, Bones Brigade: An Autobiography. The Bones Brigade was a skate team put together by Peralta in the early 80’s, then young unknowns in the sport, and inspired by the way Skip Engblom put together the Zephyr team Peralta had been part of in the 70’s. The team put together by Peralta would become legendary and rule the decade of the 80’s and beyond. The Classic lineup included Tony Hawk, Steve Caballero, Rodney Mullen, Lance Mountain and Mike McGill, with Tommy Guerrero joining shortly after and many more members following throughout the years.

Bones starts with the Del Mar competition in ’82 and Hawk’s dominant performance in the pipe. We are introduced to the crew and Peralta explains his philosophy behind the team. Peralta and business partner George Powell would form Powell-Peralta skateboards in the late 70’s and wanted to develop a team to be the faces of the brand. Peralta wanted to discover and coach the kids, therefore they would have to be discovered not just signed from the crop of pro’s available.

Bone’s first recruit was Caballero, Cab for short, a feisty 15 year-old kid small in stature who could skate like no one’s business. Peralta would then add Tony Hawk, a gangly 13 year-old who lacked a fluid style but had trick after trick in the half pipe. Then came Mike McGill, a talented tactician on a skateboard and the inventor of the McTwist; Lance Mountain, a goofy kid with a love for skateboarding but no accolades or awards to his name; and later on, Rodney Mullen, the most technically skilled skateboarder on the street of all time, inventor of many tricks but the one that changed the entire skateboarding world forever was the street ollie. Lastly, Peralta added Tommy Guerrero, another highly skilled street rider. The Doc chooses to focus on these six , mainly on Hawk, Mullen and Mountain, while also covering the other 3 more than adequately.

Mountain is the personality and the heart of the group, a decent skater who became famous due to his appearance in the early Bones Brigade Video Show, a video cassette that sold more than 30,000 copies. Mountain’s personality makes him a stand out, yet throughout the film Lance continues to thank Peralta for taking him on to the team, something he feels he did not deserve. We hear Mullen’s story of his father and his constant struggle against him to be allowed not just to compete but skate in general. Mullen dominates the competitions, going undefeated for years, but he burns out and leaves skating for a hiatus, which we also find out was the work of his dad. Mullen fights back and still skates to this day. Lance may have been the heart of the team but Mullen is the heart of this film. Tony Hawk’s legendary battles against rival Team Alva’s Christian Hosoi are documented and the film talks about how Hawk was hated by the hardcore skate crowd and actually spit on after winning. This leads to a sabbatical for Hawk in which Mullen of all people helps him work through. The six become mega stars after what Peralta now calls the amateurish Search for Animal Chin video. This goofy little film led to more TV and movie offers for the Bones crew that would land them everywhere. Eventually the parts became bigger than the whole as the kids had grown up and many moved on to form their own companies, causing friction between Peralta and George Powell who split as well. By the beginning of the 90’s the Bones Brigade was no more, but they left behind a decade of dominance.

Bones Brigade ditches the narration style of Dogtown as this is more a story of the people not just the history as Dogtown was. Everyone comes off well here but it’s Mountain and Mullen who steal the show, I would watch a feature doc on either one of these guys right now.

A suitable and solid follow up to Dogtown, Stacey Peralta has crafted himself another winner here. A Must See for Dogtown fans, yet still highly recommended for those who haven’t.

Make sure to keep up with all the goings on at Entertainment Maven by liking our Facebook page and having updates deliver right to your Facebook Feed. The only  way to stay on top of all of our articles, including more Hot Docs 2012 coverage.