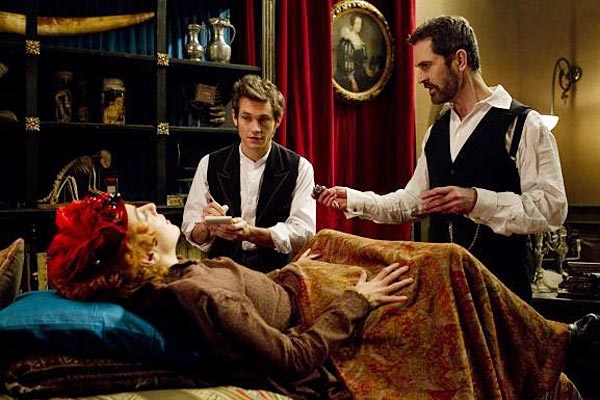 Until the late nineteenth century hysteria was a medical catch-all for ailments particular to women and thought to be caused by disturbances of the uterus.

Indeed, hysteria is “a plague of our times”, insists Dr. Robert Dalrymple (Jonathan Pryce) upon learning that his new mentee, Dr. Mortimer Granville (Hugh Dancy) is not familiar with the ailment.  Apparently half the women in London are suffering from this mysterious disease as our story begins.

Director Tanya Wexler and screenwriters Stephen Dyer and Jonah Lisa Dyer deserve some real credit here.  They have woven together a light-hearted tale that manages to include love, social history, vibrators and women’s rights in this delightfully wicked Victorian sex comedy.

Yes, you read that right.  Imagine prim, proper Victorians and Jane Austen-esque dialogue as our good doctors administer the agreed upon treatment for hysteria- the “vulvular massage”,  intended to bring on an “hysterical paroxysm” and relieve the symptoms, returning the uterus to its proper place.

While the film itself is, pardon the pun, hysterical, the medical diagnosis and consequences of the same were no laughing matter and the film deftly handles weighty issues of sexuality and gender equality in a forthright and remarkably non-preachy manner.

A great film to kick off the summer movie season with.