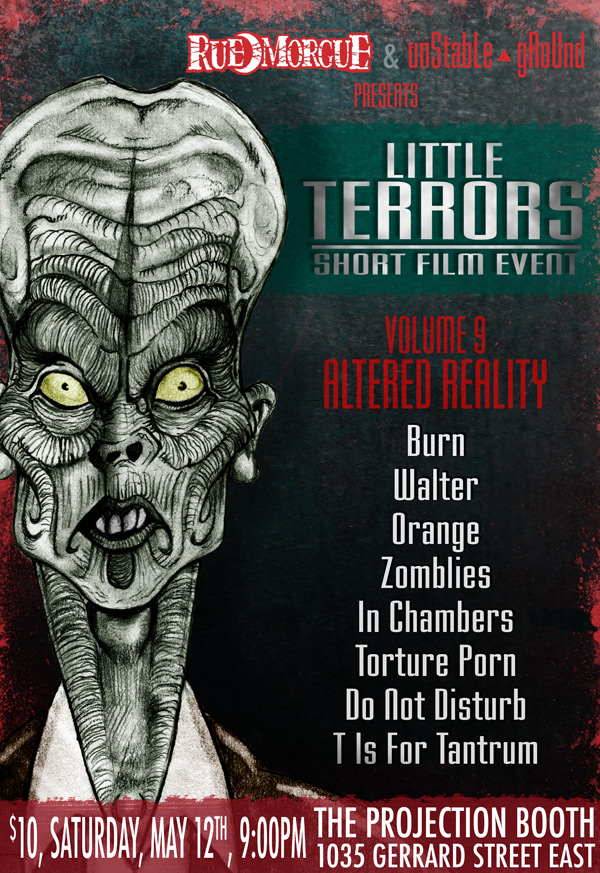 For the ninth edition of Justin McConnell’s Little Terrors series, Justin had a much harder time getting the night of genre shorts to the screen. Justin had some issues with clearance and ratings from the Film Board that needed to be sorted out before they could continue along. Once all the issues had been settled and the announcements made I very happily made the familiar jaunt down to the Projection Booth for the programme, on a rare Saturday night this time out, but I was still able to meet up with and converse with all the regulars. Also, fellow blogger over at The Horror Section, Jay Clarke, was going to debut his short ‘Orange’ this evening as well. Supporting another blogger’s project was a another great reason to attend.

Justin managed to put together another great programme this evening. The standouts were the Ryan Levin penned, from Some Guy Who Kills People fame, T is for Tantrum, a hilariously demented tale of a boy losing his first tooth. Walter is a tale of a possibly deluded (or maybe not) young man who believes he is the 3rd son of god sent to earth, his job to decide the fate of everyone he meets. In Chambers is a brilliantly shot, atmospheric little mystery from Norway that features some great performances and one hell of an ending. Jay Clarke’s Orange is a fun little piece featuring real-life couple Jeff Sinasac (from previous Little Terrors short Skhiz) and Tonya Dodds as people who meet on a park bench, but is it a harmless encounter or something else? And the great Zomblies from the UK, where the UK has been divided Escape from New York style after a Zombie infestation and a military squadron sent behind the wall. Most of the squad believes they are there only to rescue another group who lost contact behind the wall, but others are on a secret mission as well. Featuring some great chase sequences and homages to films like The Great Escape, Zomblies was a great capper to the evening.

After the programme finished Justin informed us that he will be bringing back the short Familiar (from the Fright Nights Battle Royale presentation, review here) for the first selection of Little Terrors 10 next month. This is a great opportunity to see the incomparable Robert Nolan in action, so please do yourself a favor and don’t miss it. Little Terrors 10 is scheduled for June 19th, back to Tuesdays, for all information updates on the lineup make sure to follow the Little Terrors page on Facebook.

After the films a group of us headed out to the pub for a lively discussion on many topics including the night’s festivities. A good time was had by all, and I’m sure next month we will all have a great time again.