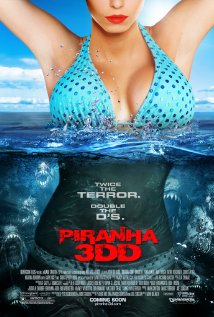 In 2010 director Alexandre Aja delivered a campy, fun-filled, bombastic remake of the 1978 film Piranha. The film has lived on as a guilty pleasure of many, including myself, with its no holds barred and severe tongue-in-cheek attitude. As Alliance films delivers a sequel this weekend the only question that remains is can they recreate the same mix of humor and campy horror again?

Piranha 3DD starts with a recap of the first film’s events, via a news report styled montage, which explains what has happened to Lake Victoria since the end of the first film. After a short diversion, in which Gary Busey delivers his two days of work on the film as a doomed hillbilly, we arrive at our new setting, a water park named Big Wet. Maddy (Panabaker) has arrived home from her year at school to discover that her Step Father Chet (Koechner) has transformed her late mother’s water park into an adult themed park complete with ex-strippers as lifeguards and a “adult pool”. Unfortunately for Maddy, Chet owns 51% of the park, she has no option but to help get set up for the new season. After a comically bad attack on a pier (that sadly is not played for laughs) Maddy, her ex-boyfriend, Deputy Sherriff Kyle (Zylka), and her geeky best friend that has been in love with her for years, Barry (Bush), track down Carl Goodman (Lloyd from the first film). Goodman tries to explain the implausible premise of the Piranha attacking in a water park and warn the group to shut the park down prior to the big season opening the next day. Of course this does not happen and chaos, including an extended David Hasselhoff cameo as himself and the return of Deputy Fallon (Rhames), reigns as the park runs red with blood.

Piranha 3DD lacks any of the fun of its 2010 predecessor as it tries to take its ridiculous premise and play it as a straight up horror film. This terrible decision leaves the film devoid of any of the endearing qualities of the first film and deserts the actors in the film to the mercy of this decision and a terrible script. Considering that director Gulager has already shown he can deliver a solid Horror/Comedy with the Project Greenlight winner ‘Feast’, the change in direction in tone is quite disappointing. Panabaker does her best to be the earnest “Good Girl” in the film with the limited material here and manages to escape fairly unscathed. The Kyle/Barry triangle relationship revolving around Maddy is hardly a new one, but it’s handled so poorly here it’s laughable and Zylka’s performance is poorly executed. Lloyd, Rhames and Koechner all deliver exactly what you’d expect here, and no more, we’ve seen these performances before in better films. The rest of the supporting cast is pretty awful here, except possibly Paul Scheer as the also returning Andrew who manages a few laughs. Hasselhoff is actually the funniest part of the film in a self-depreciating cameo as himself, complete with Baywatch theme and slow motion montage.

Ultimately the extra D in Piranha 3DD is for disappointment.  It stands as the first major letdown for me this summer as unlike other films (Battleship for example), I held some hope for a fun romp with this one. Piranha 3DD is a definite not recommend and like Battleship is an early contender for worst of lists at the end of the year.