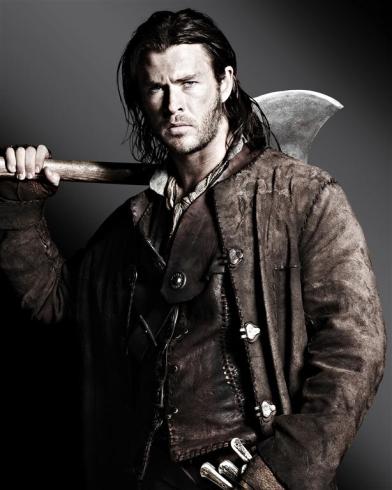 Yes, the title of this article kind of has a spoiler in it. But only kind of, so please let us move on.

What stands out to me about this retelling of the classic fairytale is just how little of it is re-imagined from the original Grimm source material.  The biggest deviation is probably whose first kiss wakes Snow from her apple induced coma (hint- he’s a drunk).  Basically what I am saying to all you boys out there is this: you been had bro.  Snow White and the Huntsman is a straight up chick flick – and not the most satisfying one at that.

A queen pricks her finger, spilling three drops of blood, prompting her to wish she had a daughter with skin white as snow, lips red as blood, and hair black as ebony… check, check, check, check.  The Hunstman falls for Snow?  Yep.  Handsome Prince?  Well he’s a future Duke, but he’s still there.  Mirror on the Wall?  Present and accounted for.  Dwarves?  Oh boy are there dwarves.

Charlize Theron is our Evil Queen and she is still gloriously vain, if a little hysterical.  That pesky meddling mirror still causes all this trouble with his “fairest of them all” nonsense.  Our mirror seems to think that Kirsten Stewart somehow fits the bill, and I understand that legions of teen girls agree. #KanyeShrug.

If anything, the film just fleshes out the broad strokes of the modern Disney version – what happens when Snow awakes and her kingdom needs reclaiming?

Birds love Snow White.  Animals love Snow White.  Everyone loves Snow White.  So when the little sprites led her to the magical white elk, I thought we were in for some “when plants attack” kind of military assault on the Evil Queen.  But alas, looks like the CGI budget did not allow for a Lord of the Rings style epic storming of the castle and that is the real shame here.

Our vain Queen will go to any length to preserve her youthful beauty, the source of her magical powers in a male dominated world, and she is resentful of the new young thing.  This is classic bitchy stuff.  And it is also an ill concealed metaphor for sex appeal as a woman’s weapon – something I had somehow not realized was a major theme of this fairytale, alongside the more obvious fear of the new, the next, and your own obsolescence.

Having finally made this connection, I found myself reflecting on how much things haven’t really changed since medieval times.  Sex still sells and all too many ladies in our social media driven, narcissistic world define their self-worth by youth and beauty.

So yes, file this one under “Chick Flick”. And take a moment to admire Chris Hemsworth, who continues to impress. I’ll give this one a mercy pass. Catch it on DVD/VOD, if only for the obvious Star Wars homage at the end (that was intentional, right?)

One thought on “ChickFlicking – Snow White and the Huntsman a ChickFlick? (Nadia Sandhu)”