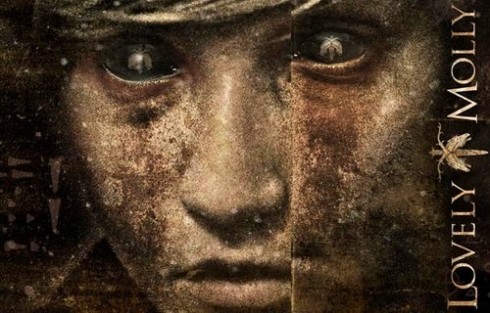 In 1999 Eduardo Sanchez practically invented the now booming “found-footage” style of filmmaking with his massively successful Blair Witch Project. Now he’s back with another supernatural thriller that, while using some of the found-footage style of filmmaking, uses a more linear style and documents the rapid descent into madness of its lead character.

Lovely Molly starts with a montage of the wedding of Molly (Lodge) and Tim (Lewis) and them moving into the family house. Shortly after this sequence we are witness to the first incident that happens. Through this we discover that the couple have been living there three months. Tim is a long-haul driver, gone for stretches at a time, and the house as it turns out was the scene of the demise of Molly’s father before they moved in. Molly’s sister Hannah (Holden) comes by and tries to get Molly out of the house while Tim is out on one of his hauls, but she refuses and ends up dealing with more “incidents” in the house. With these incidents starting to take an obvious physical toll on Molly we discover she is a former junkie and that these effects very clearly resemble her former state while under the influence. The plot continues to twist and turn to a grisly end as Molly continues her deep descent into madness.

Molly is a film built completely on one performance, and it’s a pretty damn good one, from Lodge. Her utter conviction to the role is admirable, completely throwing herself into the character and investing in her journey. Sadly the rest of the film could have used some of this conviction as it relies on tactics that seem very familiar. The supporting work from Holden is solid, but Lewis’ performance and those of the rest of the supporting cast feel underwhelming and don’t do much to bolster the film. That said, this is probably the best technical film of Sanchez’s cannon as it feels slick even though it was an ultra-low budget production.

Ultimately its the performance put in by Lodge that makes the film work. While far from a masterpiece, Lovely Molly is a mild recommend based on this.