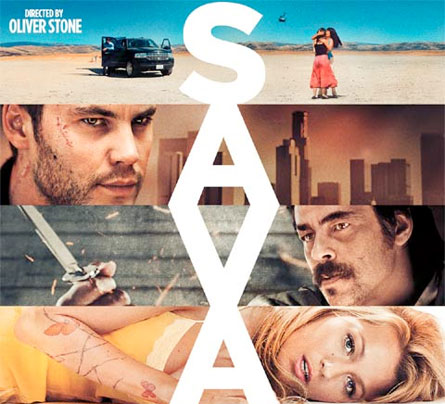 After 2010’s disappointing Wall Street: Money Never Sleeps director Oliver Stone returns to familiar territory with Savages, the tale of a couple of small-time drug dealers fighting the Mexican cartels. Stone hasn’t been back into the drug trade since his infamous scripts for Brian De Palma’s Scarface and Alan Parker’s Midnight Express and has not directed anything as violent as Savages since Natural Born Killers. Unfortunately Savages does not come close to the mastery of any of those films.

We start the story with a voice-over narration from the character simply known as O (Lively) as she sets into place the specifics of the script and establishes that she will be our narrator throughout the film. She introduces us to her two men, Chon (Kitsch) and Ben (Johnson), I say her two men as she is with the both of them in every sense of the word, a pair of intelligent independent cannabis growers who have developed a highly successful strain of Marijuana. The strain is developed from seeds brought back from Afghanistan by Chon during his last tour in the Army. Chon is quickly established as the hard-edged muscle of the group, not afraid of dealing with any form of violence, while Ben is the softer more trusting side of the equation willing to trust that his buyers will keep their end of the equation. Enter Elena (Hayak), kingpin of the biggest Mexican Cartel who is desperate for Ben and Chon’s business. And her main general/right hand man Lado (Del Toro), a particularly nasty hitman who takes care of most of the cartel’s dirtier affairs. After being turned down by Ben and Chon for a partnership with the cartel, Elena targets O as the boy’s weak link and abducts her in broad daylight to coerce the boys into cooperating.  The boys had planned to go dark and get away from the situation with the help of their money launderer Speed (Hirsch), but after the abduction they squeeze as much info as they can about Elena and the cartel out of DEA agent and business partner Dennis (Travolota). The boys then head out on a bloody trail after the cartel to get their girl back.

I must say that I really wanted to like Savages. I had hopes going into this film for a return to form out of Stone as it was the type of story he knows how to tell very well. And for the first part of the film I was there with it, through preposterous parts and a terrible voice-over narration from Lively, I was willing to go with it to see where it was going. The pacing at least worked very well for me, as at two hours plus it could have easily started to drag. And of course with naming one of the main characters O you know the Shakespeare references/homages are soon to follow. Then the third act started and it all falls apart – boy does it ever. The performances from Travolta and Del Toro both work well, but they have done these same roles before, but in better films. Hayak’s character, or should I say caricature, is little more than a stereotypical cartel leader with breasts, we saw this done better in another Del Toro movie, Traffic. Our young leads manage to just ‘be there’ for most of the film, not exuding much emotional impact, and Lively manages to underperform them both. But even with these issues I was willing to go with it, until the third act which finishes with the worst ending of a film this year. Yes the ending (or endings) is that terrible. In fact, the more you think about it after the movie has finished the more you hate it, as attested by the flabbergasted group of us after the movie discussing it.

As much as I wanted to recommend this movie I can’t in good faith recommend it for anyone, the ending still disturbs and underwhelms me too much. Savages is a definite non-recommend. You have been warned.