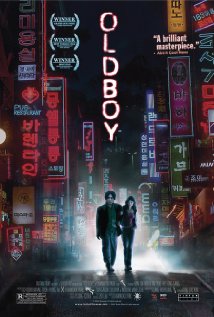 Written by Hwang Jo-hyun, Lim Chun-hyeong, Lim Joon-hyung and Park Chan-wook (based on the Manga by Garon Tsuchiya and Nobuaki Minegishi)

Now the undeniable creative leader of the Korean film movement of the last decade is by far and away Park Chan-wook. Starting with 2000’s JSA: Joint Security Area director Chan-wook has delivered diverse and ground-breaking films like the three films that make up the Vengeance Trilogy (Sympathy for Mr. Vengeance, Oldboy and Sympathy for Lady Vengeance), I’m a Cyborg, but that’s OK, and Thirst. Even though the Toronto Korean Film Festival wrapped over a week ago, I would like to use the background of the TKFF to talk about one of my favorite Korean films of all time, Old Boy.

Oh Dae-su (Min-sik) has always been a troublemaker. We open in a police station where Dae-su has been brought in on a drunken disorderly charge. After a series of funny outbursts Dae-su is sprung by his high school friend No Joo-hwan (Dae-han). It’s also Dae-Su’s daughter’s birthday and as Joo-Hwan talks to Dae-su’s wife explaining that he will get Dae-su home he suddenly disappears from a crowded street. Dae-su wakes in a locked room without any explanation. This cell will be his home for the next 15 years. We watch as Dae-su goes through his routine inside the cell, occasionally getting dosed with knockout gas so that his sheets can be changed and his hair cut, as he fights depression and starts training and preparing for whenever he may get released by punching a solid brick wall. One day 15 years later Dae-su wakes up on a roof of a building in the exact same spot where he was taken 15 years earlier. A suicidal man stands on the ledge of the building ready to jump until Dae-su forcefully makes him listen to his tale. After his confession the man states he wants to tell his tale which prompts Dae-su to stand up and promptly leave without another word. Dae-su wanders the streets until he ends up in front of a restaurant when a homeless man gives him a phone and wallet full of cash with the simple statement “Don’t bother asking me anything, I know nothing”. Once entering the restaurant Dae-su meets Mi-do (Hye-jeong), a young server/cook who looks to help him, and after receiving a phone call from his captor promptly passes out. Dae-su ends up at Mi-do’s home and she becomes his accomplice in piecing together the missing 15 years. Eventually Dae-su meets with Lee Woo-jin (Ji-Tae) and his accomplice Mr Han (Byeong-ok). Woo-jin gives him 5 days to discover who he is and why he imprisoned him for 15 years. The story continues as Dae-su unravels the mystery and moves along to one of the most shocking twists in film history.

Choi Min-sik has never been better than he is as Oh Dae-su. If he truly is Korea’s Robert DeNiro (he is) then Oh Dae-su is his Jake Lamotta or Travis Bickle, or maybe more appropriately the two of them combined. Min-sik is simply brilliant in one of the greatest performances I have seen on-screen. Kang Hye-jeong’s Mi-do is the reason Dae-su comes back to reality and does not simply fly off the handle in an infinite fit of rage. The rest of the performances are just as solid throughout. Wook-park once again proves his mastery in casting and storytelling. Oldboy has become iconic for its hallway fight sequence, where Oh Dae-su decimates a small army with only a hammer in hand, and its stunning final sequence. But it’s the smaller sequences like those in the jail cell and the ever cryptic ending that flesh out the story and really drive the impact home.

Oldboy is one of what I like to call an “all-time top tenner” as I love it so much it will seemingly always have a spot on my all-time top ten films list and in many other top ten lists as well. I cannot recommend Oldboy strongly enough, it is an absolute must see.