The blending of the horror and comedy genres has resulted in some of my favourite films of all-time. From the ridiculous blood bath in Peter Jackson’s Dead Alive to the everyman suburban horror on display in Joe Dante’s The Burbs; when executed properly filmmakers can really hit a home run in this genre. However, it’s hard enough to make a successful pure comedy or horror movie as it stands, let alone blending two seemingly polar opposite genres. Many have tried and few have succeeded. Fortunately, even through the translation from Spanish, Moreno had his fingers on the pulse of the horror/comedy genres and has created one of the best werewolf movies of recent memory.

Tomas (Otxoa), like many struggling writers before him, has decided to retreat to a quiet country home to work on his second novel. Luckily for him he has the perfect location in his home village of Arga, and to top it all off, the mayor has invited Tomas for a special ceremony to receive an award for his success with his first novel. Making his home in a huge country house left to him by his parents, Tomas readies himself for some serious writing and just maybe a little handshaking with the locals as he has no doubt become a celebrity here. But writing time is hard to come by as Tomas meets up with his somewhat intrusive childhood friend (Areces), as well as Tomas’ sleazy Editor (Rosa), who is always trying to escape one criminal charge or another. However, Tomas’ novel is quickly shown to be the least of his concerns as it’s revealed that the villagers may have a more sinister reason for welcoming the young writer back to the town of Arga. 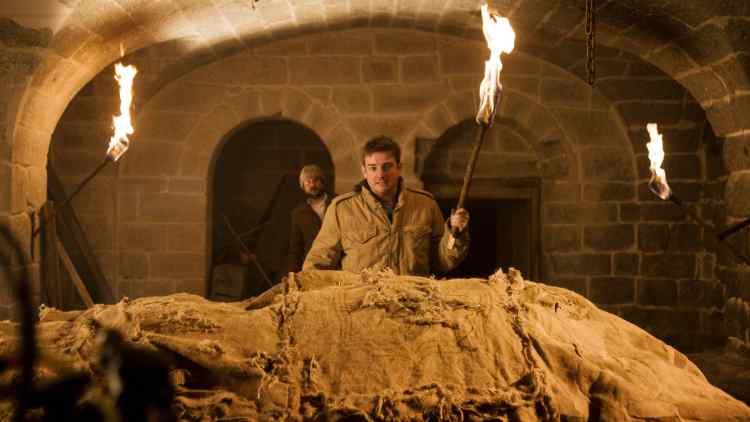 Game of Werewolves starts off with plenty of charm and comfort as we accompany Tomas into the quiet village of Arga. The countryside and the large country house that Tomas calls home are absolutely gorgeous to behold. Moreno and company certainly know how to make a product with a very professional feel despite a relatively low budget (at least when compared to Hollywood fare). The filmmaking know-how continues into the realm of characters and character development as Tomas, his friend, and his Editor rarely have overlapping traits and all feel like equally interesting characters. The performances by Otxoa, Areces, and Rosa only improve these characters as all three men contribute to a wonderful onscreen group dynamic.

It took a little bit of time for the comedy in Game of Werewolves to get rolling, but when it did it hit really hard. There are plenty of funny moments in the movie, but there are also multiple riotous moments. I don’t often laugh this hard in a theatre. Unfortunately, as with any comedy with subtitles, English speaking audiences are going to miss out on some of the jokes and comedic timing. I couldn’t help but feel I was missing out on Rosa’s comedic timing in particular, as some of his punch lines were displayed onscreen as subtitles before he actually spoke the line. A minor complaint as Rosa has plenty of wonderful physical comedic moments, I just wish I could have appreciated his dialogue driven comedy as well.

Another great aspect about the movie are the practical effects. During the Q&A Moreno spoke candidly about the prevalence of CGI in transformation sequences (werewolves) and his love of the practical transformation and werewolves found in classics, like American Werewolf in London. Despite the budget, the practical werewolves on display in Game of Werewolves look great and are perfectly suited for the horror/comedy that Moreno has made. While the werewolves look great, I have to admit that they get knocked down or killed a little too easily for my taste.

Game of Werewolves has been getting a great response on the festival circuit so far, and the stop off in Fantasia is another notch on the belt for Moreno. If you’re a horror/comedy fan, do yourself a favour and check out Game of Werewolves when you get the opportunity. A rip-roaring good time and one of the best werewolf movies in years, Game of Werewolves is best viewed with a warm audience where the laughter is infectious.

One thought on “Fantasia 2012 – Game of Werewolves Review (Matt Hodgson)”