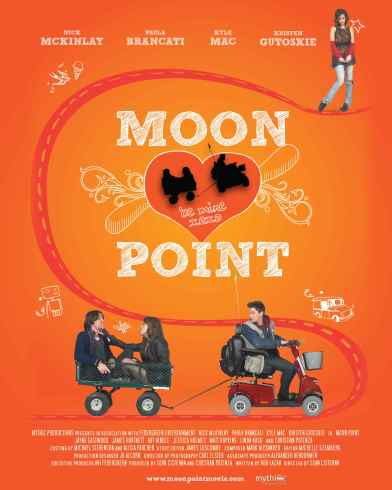 Arriving in stores on Tuesday Aug 7th from Anchor Bay entertainment is the quirky little Canadian indie comedy that made the rounds on the festival circuit earlier this year, Moon Point. With a cast mainly made up of friends of the production team and director, the micro-budgeted Moon Point sets out to charm us but does it have enough substance above the quirk and randomness to succeed?

We start by meeting Darryl Sytrozka (McKinlay), a slacker supreme still living with and off his mother as his only source of income is a meager paper route he splits with his wheelchair bound friend Femur (Mac). During his cousin Lars’ engagement party, thrown at his house by his mother, Darryl is bombarded by family members all asking him when he plans to get his act together. One night Darryl sees a news story asking for extras in a locally shot horror film and its star is coincidentally the grown up version of the 10 year old girl that was his first love. Determined that meeting his long lost love Sarah Cherry (Gutoskie) again will finally allow him to hit the proverbial restart button on his life and find some purpose. So Darryl grabs Femur and his new scooter and hits the road for the multiple day trip to Moon Point, Darryl being dragged along behind in a wagon at the blistering speed of about 5 miles per hour. Along the way they meet the usual variety of bizarre characters, including a man in a banana suit (Hindle), and their group grows to three with the inclusion of Kristin (Brancati), who is running away from her own problems. The three carry on, fight and break up along the way until they reach the titular Moon Point.

Moon Point suffers from the same problems that other films trying to emulate the likes of Wes Anderson fall victim to. The difference is that no matter how much quirk and supposed randomness may be all over films like Moonrise Kingdom, the essence of what drives the film and makes it work is the strong story at its core. Moon Point’s focus is more on the situation and set pieces than the story behind this and it suffers for it. The film is muddled and unfocused with points that are very funny and parts that fall very flat. Does having a bad karaoke sequence as a major gag in a film ever work? The actors are really let down by the script here. McKinlay and Mac are passable, they have some chemistry that works. Brancati is our highlight here as she embodies the adorable spunky girl who spins the hearts of our two best friends around her finger. For the little time that she appears on screen the gorgeous Gutoskie does an admirable job as the unrequited love of Darryl’s past. Hindle, as usual, delivers a scene stealing supporting performance that makes you wish there was more. The film looks good as the meager budget does not translate onscreen as anything but a much larger production. Location scouting and cinematography really help flesh out the background. Though despite its great look and casting, the failings of the film still come back to script and direction.

Sadly Moon Point does not work enough for me to be able to get behind it. Moon Point is a non-recommend.