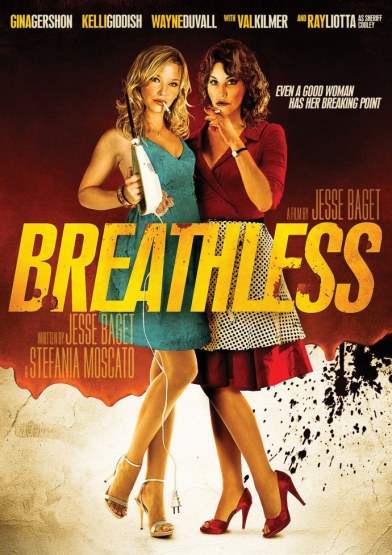 Arriving in stores this week from Anchor Bay Entertainment is the new comedic thriller Breathless. Starring Gina Gershon and Kelli Giddish and from the director of the upcoming Wild Side with Juno Temple and Nicolas Cage, Breathless is the story of a heist and the wife who finds out about it. But does this direct to video offering pack enough bite to entice you to spend you hard earned dollars on it?

Breathless starts with Tiny (Giddish) arriving at Lorna’s (Gershon) trailer and discovering an unconscious Dale (Kilmer) on the floor of the living room. It appears that on the previous day a bank robbery occurred in the next county and Lorna has deduced that Dale was in on it. Bringing Dale around again, the two friends start grilling Dale about the robbery and the location of the money, but not all is what it appears as there are many issues that play out between the three. After an accidental weapon discharge causes the situation to change drastically, a visit from the local lawman, Sherriff Cooley (Liota), manages to heighten the tension and increase the scrambling. We get twist after twist until the biggest twist happens at the end of the film, and sadly it is predictable like most of the rest of the film.

The script behind Breathless is handicapped by its one-setting scenario, but it also manages to become very predictable and stale in dialogue and the way the story plays out. Seemingly content to rehash the past, there is a lot of material, almost all of it in fact, that feels like reheated leftovers of better films and other not so well made films. Writer/Director Baget does little to be original in this offering and unfortunately the lacking script also does no justice to its performers. Gershon, much better in this month’s Killer Joe in theaters now, is pretty much just phoning it in here. She knows what the film is and knows she does not need to put herself out there too much with her character. Giddish is really trying here but the script completely lets her down. The rest of the cast is actually used very sparingly and as such are mainly lost in the background of the film. The setting of the trailer may be the one aspect of the film that really works. Allowing only one building for the entire setting, the set decorators and designers had a much smaller ‘canvas’ to deal with and it shows in the attention to detail displayed in the film. It may not be much but at least the people taking care of the set knew what they were doing.

The special features on the disc are fairly barren as we get an audio commentary from the director/producer team, which is pretty standard, and a very disappointing 15-minute ‘making of’ that really doesn’t serve up nearly enough actual behind the scenes footage.

Lacking in originality and killer performances, Breathless is a predictable crime/thriller/comedy. There will be better options for your money in the coming weeks, and you may be better served holding out for them. Breathless is definitely a non-recommend.