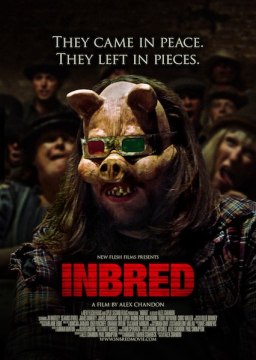 From the UK we get our next Toronto After Dark 2012 selection, Inbred. Taking direct influence from films like Deliverance, Alex Chandon brings us one of the most un-repentantly, vile and crude films since perhaps A Serbian Film. But is there actual story worth watching amongst the blood splatter and septic tank contents?

Inbred starts with two social workers, the overly eager Jeff (Doherty) and the more jovial Kate (Hartley), along with their four charges arriving in the small town of Mortlake. The four young offenders have been taken out to the countryside for a weekend of character-building. After meeting the tavern owner Jim (O’Neill) and the eccentrically creepy townsfolk inside “The Dirty Hole,” the group decides the smarter move is to stick to themselves and ignore the people surrounding them. But after a minor incident with pack of particularly hostile locals, the group finds themselves in the middle of a rapidly escalating, blood-soaked, warped nightmare. It seems that the villagers of Mortlake like to amuse themselves by staging a circus-like performance in which the unwilling stars are bound, tortured and killed in ways involving farm equipment, animals and good old-fashioned blunt objects. But this time the prey fights back. 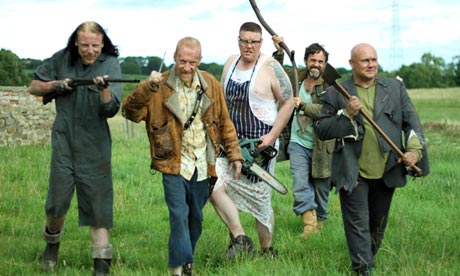 Inbred is a terrible mess from beginning to end. Not being able to decide if it wants to be a horror-comedy, thriller, deliverance style drama or torture porn, the film decides it will dabble in all of them and ends up a muddled disaster. The script is made up with familiar set pieces and generically stereotypical characters, especially in the young delinquents. The motivations and story arcs are lazy and uninspired. The only actor that manages to escape here is O’Neill as the maniacal Jim. His performance here screams and begs for a better movie to surround it. Outside of O’Neill, most of this cast is either passable at best, as in Hartley, or severely amateurish. The young group of locals that spin the story out of control are particularly uninspired. The film does manage to provide one fascinating setting in that of the bloody circus style show used to dispatch the outsiders who wander into town. The concept is excellent and the actualization is passable, but far from good enough to make the film work. I will also give kudos to some of the behind the scene crew because the set design and location work very well. But of course this film is all about the kill scenes which are so laughably over the top and ridiculously unrealistic that when the film still tries to return to a darker tone to deliver scares it does not work. 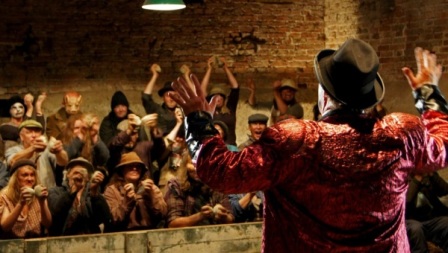 Ultimately Inbred is a anomaly, a film I dislike immensely at a festival I love. I know there is much praise out there for this film and this review may be in a minority, and if this film works for you I am truly happy. Inbred is a strong non-recommend.