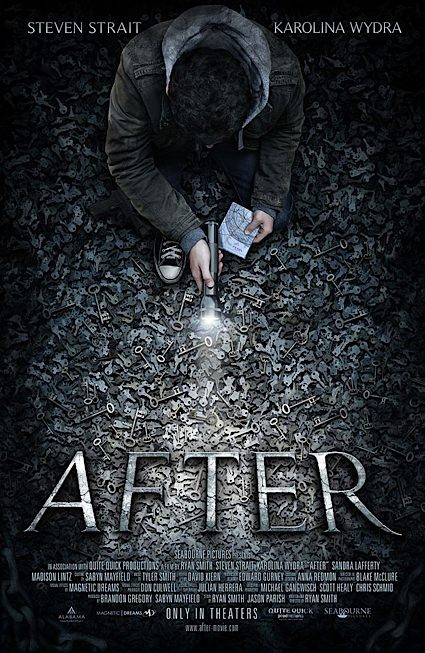 Making its Canadian Premiere as part of Toronto After Dark 2012’s Sunday night lineup was the fantasy thriller After. The tale of a pair of bus crash survivors who awake to an empty town hopes to harken back to a darker version of the more whimsical films of Joe Dante and Steven Spielberg back in the 1980’s. But can After live up to such a high pedigree?

We first meet Freddy (Strait) and Ana (Wydra) on a bus, heading home to the small town of Pearl where they are virtually neighbours, although they apparently have never met.  The bus suddenly crashes and lands Freddy and Ana in the hospital.  Ana awakes to discover that evidence abounds that she and Freddy have spent many weeks in the hospital. As the pair attempt to resume their lives they soon discover that seemingly everyone in town has disappeared. Eventually Freddy and Ana meet up once again and as they try to piece together what has actually happened to the town they also must discover why a dark cloud encapsulates and traps them in Pearl. Also, what is the nature of the creature that has been left behind with them? They must sort this entire situation out as Freddy and Ana discover the fog is moving inwards, putting the town and themselves on the clock.

After is a concoction of fairy tale mixed with creature feature. Strait and Wydra do admirable jobs here, especially since the film is almost 90% them onscreen with only each other. The setting and set decoration is fantastic for a low budget indie, with fantastic detail given to each set. Even the effects work here is solid, though I’m sure the filmmakers quickly discovered that digital smoke is just as difficult to properly manipulate as digital fire is. I will note that the creature does not completely work here as it kind of looks like it has been soaking in water for two weeks and has eternal pruning effect. The script device that sets the fog and our protagonists in motion is actually not overly original, but delivered in a completely original and inventive manner. Director Smith does a good job engaging us with the characters enough throughout the film that we continue to follow them until the end – until the actual end that is. Sadly this is where we hit the other biggest issue of the film, the last 5-10 minutes are straight TV movie of the week material, cliche ridden and overly sappy. Not outright horrendous enough to kill my enjoyment of the film but groan inducing for sure.

Reminiscent in tone, not material, to films like M. Night Shyamalan’s Lady in the Water with its dreamlike, fairy tale inspired visuals, After will keep you enthralled up until it’s unsatisfying conclusion. But there is way more than enough here to enjoy. After is a recommend.

One thought on “Toronto After Dark 2012: After Review (Kirk Haviland)”