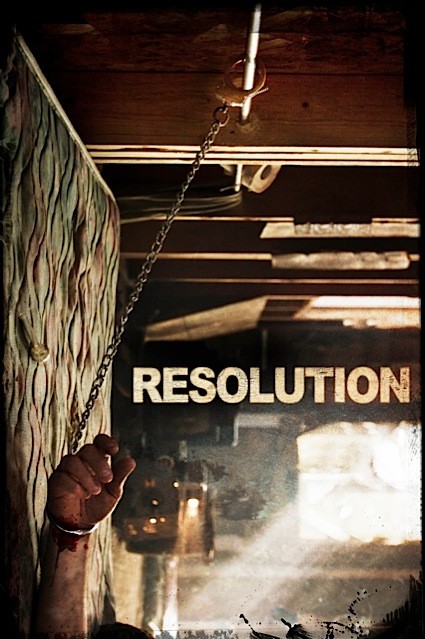 Resolution, the hit film from the Tribeca and Fantasia festivals made its Toronto debut at Toronto After Dark 2012. Another cabin in the woods style thriller in a year that has also given us ‘Cabin in the Woods’, Resolution is a smaller more compact story that strives to tell an equally intense and original story. But the question is can they succeed?

Mike (Cilella) receives a deranged video via email from his junkie friend Chris (Curran). This prompts Mike to track down Chris in a cabin by the woods with a desperate plan to attempt to rehabilitate him. As the two bicker and squabble in the dilapidated abode, they soon find themselves accosted by increasingly sinister neighboring forces. Mike also stumbles upon a series of interconnected media (from diaries to VHS tapes) that begin to embroil them in a possibly supernatural plot that pervades both the cabin and its surroundings.

Resolution is not a movie that cannot be easily described or dissected, hence the shortness of the synopsis. The elements are all there, the result just needs time to sit and be contemplated. This review did not come together until a few days after the screening.  The leads Vinny Curran and Peter Cilella are both fantastic. Their natural chemistry – all of the filmmakers are incredibly close offscreen – just oozes off the screen and Vinny’s comedic timing is impeccable. Despite the natural tendency to dislike a character that is in Chris’ situation, a stubborn crack addict that doesn’t care who he hurts, Curran manages to make him a loveable lout. Peter gets hit with the straight man role this time out and responds admirably.

The script contains some of the best dialogue of any film screened at Toronto After Dark this year and makes the audience work to discover what is really happening around them. Spooling out at a methodical pace and building paranoia as more evidence is discovered, the script remains smart and edgy throughout. The ending is challenging and will be divisive as it does not explain the goings on but leaves the audience with their own thoughts and theories. Directors Aaron Moorehead and Justin Benson deliver a tightly shot film with CG work that is so flawless it is bound to fool even other effects programmers. Using all actual locations, including the cabin, and as much natural lighting as they can, the directors manage to get amazing results.

One thought on “Toronto After Dark 2012: Resolution Review (Kirk Haviland)”