New in theaters north of the border this week is director Neil Jordan’s newest take on the Vampire mythos, Byzantium. Jordan returns to the genre he took on almost 2 decades ago with the Anne Rice penned Interview with a Vampire, but this time around he has a new take on the entire history of the vampire phenomenon.

After fleeing their latest living quarters after an unforeseen attack, two mysterious women seek refuge in a run-down coastal resort. Clara (Arterton) meets lonely Noel who provides shelter for her and her daughter Eleanor (Ronan) in his deserted guesthouse Byzantium. Eleanor, an eternal schoolgirl, befriends Frank (Landry Jones) and tells him their lethal secret. They pair are actually mother and daughter, were born 200 years ago and survive on human blood. As knowledge of their secret spreads, their past catches up on them with deathly consequence. 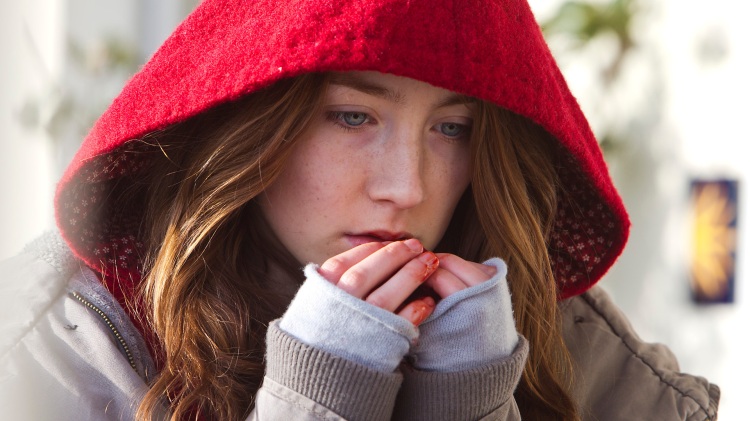 Byzantium takes a completely different spin on the Vampire story as there is no allergy to sunlight and girls roam free in the bright sun, fangs are never sprouted on screen, instead a protruding fingernail is used to open the victims jugular, and new vampires are not sired through bite and blood transfer. That last point is the biggest, most drastic change from Vampire lore as in Byzanitum it is a cave on an island that transforms humans to vampires. Looking suspiciously like a womb, this vampire transformation has been guarded for decades and only men have been allowed to enter.

Arterton is fantastic here, playing a girl with a terrible teenage encounter that drastically alters her life forever, as she mesmerizes the men in her life and the audience alike with her charm and charisma. Clara has been a hustler all 200 years of her life and this is all old hat for her. Sadly Arterton severely outshines her co-stars as Ronan comes of flat and at times uninterested, Landry Jones seems content to channel an ineffectual Wiley Wiggens from Dazed and Confused and Johnny Lee Miller’s thankfully small role is sloppy overacting at its finest.

The film has pacing issues as well, keeping a slow methodical pace through the main middle section of the story, yet rushing to tie up all the loose ends and get to its brutal and bloody ending as quick as it can in the last 25 minutes. But the bloody and brutal part is actually one of the shining stars of the film as Jordon utilizes as much practically driven and realized effects as he can in the filming, giving a grounded feel tot the story and distancing itself from the Twilighty inspired CGI packed pretenders that do not work as well.

There is a lot that can be said about the feel of misogyny that seemingly drips off the film – cave is like a womb yet women are not allowed to sire vampires and because of what Clara did she is hunted mercilessly, after 200 years of living Clara falls back to making a living off her back as she has always done – but these arguments can be made better by others.  The practical effects are great, and so is Arterton, and that packs just enough appeal and charm to make the film a positive experience in the end.