New in theaters this weekend from the director of “Red” Robert Schwentke is the latest multimillion dollar extravaganza vying for your money, R.I.P.D. Jeff Bridges and Ryan Reynolds headline as two cops dispatched by the otherworldly ‘Rest In Peace Department’ to protect and serve the living from an increasingly destructive array of souls who refuse to move peacefully to the other side.

Veteran sheriff Roy Pulsifer (Bridges) has spent his career with the legendary police force known as R.I.P.D. tracking monstrous spirits who are cleverly disguised as ordinary people. Once the wise-cracking Roy is assigned former rising-star detective Nick Walker (Reynolds) as his junior officer, the new partners have to turn grudging respect into top-notch teamwork.  When they uncover a plot that could end life as we know it, two of R.I.P.D.’s finest must miraculously restore the cosmic balance, or watch the tunnel to the afterlife begin sending angry souls the very wrong way. 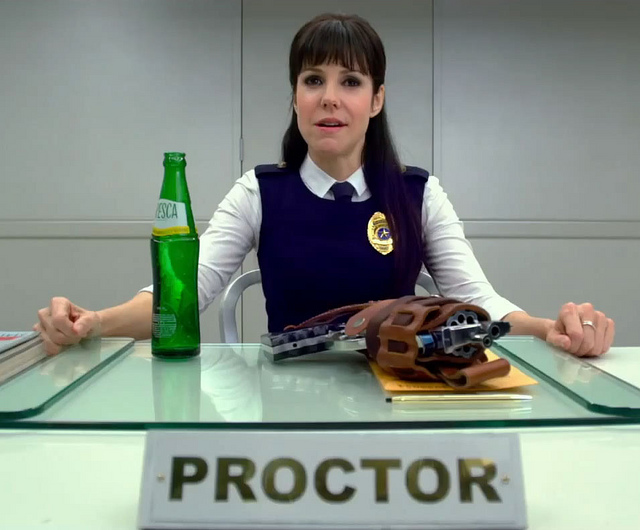 The biggest issue with RIPD is perhaps that nothing seems to happen in the film. All the actions play out without a morsel of interest and the impact of what the characters are supposed to be doing, saving the world, never registers for a second. The stakes and consequences in the script feel as flat and uninterested as some of the actors in the film. What Jeff Bridges is doing, other than cashing a paycheck, is baffling. His Roy comes off as a very sad mix of Col. Sanders from Kentucky Fried Chicken fame, the drunkest moments of the ‘Dude’ Lebowski and a poor impression of Val Kilmer’s Doc Holiday from “Tombstone”. Ryan Reynolds delivers exactly the same performance we always get from Reynolds, but the poor script and dialogue means his affable charm becomes uninteresting and downright terrible in parts. The only actor that brings anything to the screen is Mary-Louise Parker as the gruff superior officer Proctor. Parker is mesmerizing, but sadly appears in less than a third of the 95 minute film, leaving the audience awaiting her return every time she leaves.

The CGI effects work is actually pretty well done, the more comic based unrealistic look of most of the ‘popped deados’ certainly look good onscreen, but how they are used is what becomes the issue. The action apes the early “Men in Black” films, but the first of those was almost 20 years ago and looks dated upon re-watching, without the tongue in cheek winks and nods to the screen. The big action sequences seem so surreal and ineffective within the world that they occur in and the lack of impact in the world of the film translates to the audience. Kevin Bacon’s Hayes proves to be a very lackluster villain that leads to another action packed yet lame and uninteresting finale. Lastly, and perhaps even most egregious, the big mystery of the film that Roy and Nick have to unravel is evident from the very first moments of the film and never that much of a mystery.

R.I.P.D. misses the mark on many points. Any of the film’s funnier moments are packed into the marketing of the film and then stomped to death in the film, the use of the avatars that Roy and Nick have being the biggest example of this. In a summer that has been packed with many solid blockbusters and some surprising ones, “White House Down” and “World War Z” for example, that turned out to be more fun than what was expected, R.I.P.D. underperforms on the below average expectations the film entered with.