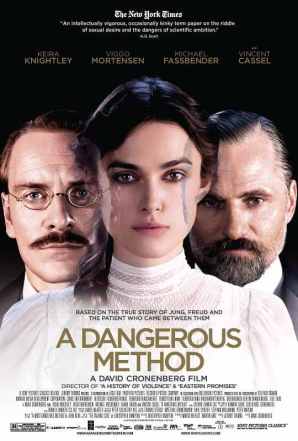 It seems like David Cronenberg had taken a brief hiatus from the film world following A History of Violence and Eastern Promises, two films which are truly unsettling thanks to their depiction of cruel and sometimes indifferent violence in the world of organized crime. Cronenberg returns with A Dangerous Method, a decidedly different story from his past two films, with a focus on the cerebral and the emotional world of psychologists and those afflicted by mental illness.

A Dangerous Method is about the relationship between Carl Jung (Michael Fassbender) and Sigmund Freud (Viggo Mortensen), two of the most important figures in the history of modern psychology, and as a result probably one of the most interesting relationships between two individuals in the past hundred years or so. The contrast between their beliefs and character could not be more emphatic. Jung is a young man, open-minded, and has a generally positive outlook regarding the human mind; Freud on the other hand is an older man, certain about the importance of his theories, and satisfied that the underlying cause of neurosis is always sexual in nature. These notable differences make it easier to understand how upon meeting, these men famously had a conversation which lasted thirteen hours. In addition, the relationship between Jung and Sabina Spielrein (Keira Knightley), one of Jung’s patients, also takes centre stage in A Dangerous Method. Spielrein is a fiercely intelligent woman with a debilitating mental illness which Jung finds fascinating. The circumstances surrounding these three characters provide more than enough content for an intriguing story, unfortunately the final product comes off as a little dull and severely hampered by one character/performance in particular.

Fassbender and Mortensen do a remarkable job in their portrayals of these intellectual giants. Their onscreen meetings are enthralling and often contain amusing humourous moments. The best scenes in the film are those in which Jung and Freud discuss their unique views and theories which cascade across the dialogue for the enjoyment of audience members with an interest in psychology.  Many viewers familiar with Jung and Freud will recognize some of the pairs most storied discussions about dream analysis and one in particular about occult powers. Despite these intriguing scenes, the narrative in A Dangerous Method does not seem properly suited for film. The story often slows to a crawl thanks to the fact that much of the communication between these two men was in the form of written correspondence; be prepared for plenty of letter reading and writing scenes. Finally, any hope of salvaging what was probably a much better book than film is lost thanks to the otherworldly performance by Keira Knightley as, apparently, the single most neurotic person to have ever walked the earth.

I wasn’t familiar with the real life character of Sabina Spielrein going into A Dangerous Method, but if she was anything like Kiera Knightley’s portrayal, then this is further reason to tell this story in a book rather than a film. Knightley is onscreen for the majority of the picture, and most of her time is spent screaming, crying, thrashing about, and just looking downright tormented. Dynamics and niceties have been ignored in favour of a frontal assault on the senses. Hints of Spielrein’s intelligence can be found only at the level of the screenplay and are not communicated through Knightley’s acting. She looks to be in the running for over-actor of the year with this excruciatingly abrasive performance that is accompanied by a Russian accent which goes on and off like a strobe light. In the end, she is hugely distracting and manages to topple a film which was already on unstable ground.

2 thoughts on “A Dangerous Method Review”