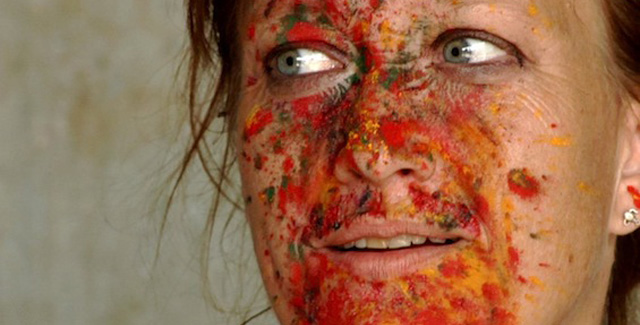 Tickets are still available for May 5th, 9:30pm: CLICK HERE

Despite the Gods is the story of the filming of a overambitious Bollywood/Hollywood production Hisss, a fantasy, horror, romance, dramatic story of a female man-eating snake goddess. Jennifer Lynch, straight off her return to directing Surveillance after a 15 year absence, is tapped to direct. She packs up and moves to India with her then 12 year old daughter Sydney in order to start the production and soon realizes she has been dropped head first into another world. Jennifer proclaims India to be the noisiest place on earth, there is background noise from crowds, construction and random other places, so much so that Jennifer literally starts “conducting” the noise around her to illustrate her frustration. And this is merely during pre-production. Jennifer starts to worry if this, her 3rd film, will be doomed as her father David Lynch’s 3rd film was, the now infamous production of Dune.

Production begins and as feared everything goes awry. The production uses the most basic of elements: handmade wooden rigs, unprofessional lighting, an assistant director and cast who barely speak English providing an instant barrier between them and Lynch.  All of these issues are trivial compared to the issues between Jennifer and her producer Govind Menon. Menon is a constant presence on the set, fighting with Lynch and constantly trying to take over the production. And unfortunately most of his tirades are targeted at Sydney, who is also constantly on set and as 12 year old’s are apt to do, seems to get in Govind’s way and on his last nerve. By the end of it Lynch spends 8 months in India shooting a film Govind takes away from her in the editing room anyway.

Lynch comes off very likeable in this film. Her mounting frustration with the Indian film process that produces “too many cooks in the kitchen” eventually makes her throw up her hands and focus only on the acting performances. Unfortunately the final product that is Hisss may not even contain the same takes she fights so hard for during the filming. Lynch herself has never watched the film and still claims it as her biggest failure in the business. Her original cut of the film was destroyed and there are no more copies so it seems assured we will never see it screened, which is a shame. The true stars of Despite the Gods are Govind and Sydney. Govind’s manic attitude and paranoia permeate the production. As the film’s villain he’s well cast.  Sydney’s charm and bright smile make her instantly endearing and you empathize with her almost immediately.

As a piece of entertainment and as a warning for young filmmakers, Despite the Gods works on both fronts. A truly fascinating film from director Vozniak.