Not a lot can be said about The Avengers that hasn’t already been said.  Joss Whedon’s film has been previewed, reviewed, and even sparked a media feud on the way to a record opening weekend.

Call it Spring Fever, but despite this wall of coverage I did manage to find an angle that required immediate exploration- the bicep to tricep ratio of the world’s heroes.  Drool.  Marvel and Disney’s casting department really hit this one out of the park:

Captain America is like Superman. This is a role that can go horribly, horribly wrong for an actor.  Earnest, upright, brightly costumed- that’s a tough gig these days.  But wow.  Chris Evans is a revelation from the golden sheen of his slicked back hair, to that square jawed resolve… hawt.  This man (and his shoulders) really sold that red, white and blue costume. Consider me a pre-sale for Captain America 2 tickets.

In a rare moment towards the end of the film when Robert Downey Jr. isn’t being smarmy or sarcastic as Tony Stark, one is suddenly reminded that this is one damn fine looking man.  It’s those puppy dog eyes.  Gotta be.

Mark Ruffalo is a nice guy, which can be death on the big screen, but his Bruce Banner manages a geeky chic that is awkward and endearing at the same time.  Kudos Mr. Ruffalo.  It takes a real man to rock those hideous faded cords and hide those broad shoulders under a ratty, oversized jacket.

Jeremy Renner is everywhere.  Literally.  I saw the Hurt Locker and he does play soldier very well, but why is this man in every movie franchise?  Mission Impossible, Bourne and The Avengers in 2012 alone!  Well after a close assessment of his work in The Avengers I believe the answer lies in a combination of piercing blue eyes and some really very nicely proportioned arms.  Shoulder to bicep, those arms will not be denied!

Nicky Fury covers all sins.  I am almost  ready to forgive Samuel L. Jackson for the debacle that was his portrayal of Mace Windu in the regrettable Star Wars Prequels.  Eye patch. Leather jacket.  Swagger.  Case closed. 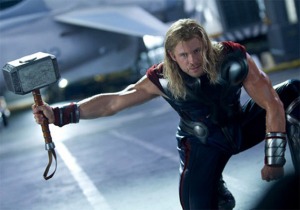 After suspecting it during Thor, I am inching ever closer to the thesis that Chris Hemsworth equals the New Brad Pitt.  And what Hollywood needs right now is another Brad Pitt. Rawr.  Someone get on that Legends of the Fall remake, STAT!