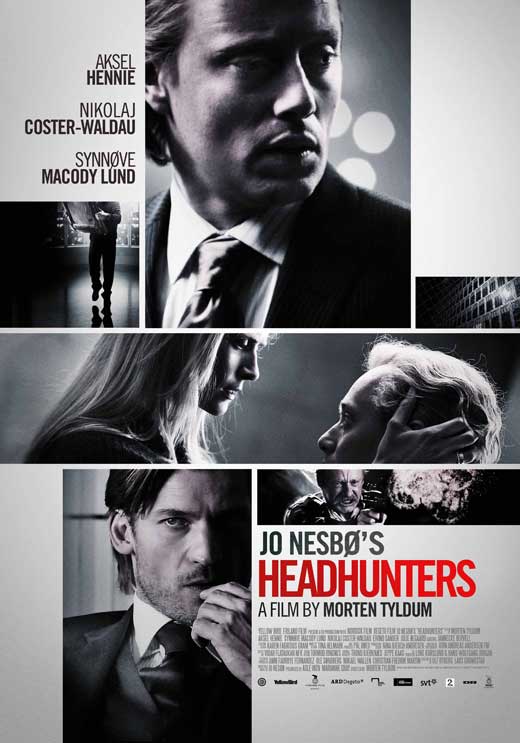 The protagonist of the movie adaptation of Jo Nesbo’s novel Headhunters doesn’t have a name, for now. He’s simply a man wearing a ninja outfit, instructing us on how to steal a painting. It shows the audience his physicality, a man trying to infiltrate and escape until those abilities of his are extinguished.  The scene is surprisingly a deal maker, a contrast against the lack of sympathy we would otherwise inflict upon Roger Brown (Aksel Hennie) – what kind of Norwegian name is Roger Brown? Is this movie already pitching itself for an American remake? Anyway, Roger is the façade half of his double life as a member of the credit card bourgeoisie, equipped with a tall art dealer wife Diana (Synnøve Macody Lund) and a stylish house to compensate for his height. Roger is a titular head hunter, using his high level human resources job to slip expensive paintings out of men who are applying to be CEOs, who apparently look like male models, in Pathfinder, the company he works in. These establishing scenes are crucial and effective because from this point on it’s all about negotiation from one part of the premise to a calculated audience reaction.

He might just meet his match when Diana introduces him to a Danish ex-paramilitary man, ex-CEO Clas (Nikolaj Coster-Waldau, looking like a younger but scruffier Olivier Martinez). There are mixes of emotions within Roger here, he’s jealous of Clas but he also offers him the job that he doesn’t seem to want. What further attracts Roger to Clas is that the latter’s dead grandmother used to go out with art thieves called the Nazis – the Scandinavians still have a morbid fascination with those guys – and has given her a Rubens painting that’s been missing for decades. Diana appraises it, he steals it. Part of his modus operandi is reprinting the artwork he wants to steal and switching it because apparently canvases that have been MIA since WWII would have high-definition colour jpegs floating around somewhere. Or that Roger or the story isn’t grateful enough to include the forger a cut of the money he’s earning. I’m an Art History major, I know what I’m talking about. Whatever. Anyway, the painter becomes the doll in this sleek rendition of the Night of the Hunter story, because when Clas figures out that he’s been robbed, he’s going to come after Roger with full force.

The movie’s second half is a chase thriller that can’t be portrayed as scary or sincere so they’re played up for laughs, like a Slumdog Millionaire reference (you know, the really gross part). Other elements passed off as comedy are ludicrous sexuality and animal cruelty. These scenes are over the top and give us two things we might want. First is the Schadenfreude of watching a member of the 1% – a self-made man but a 1%-er nonetheless – suffer and be degraded by half of the things on the liquid abject list. Second is that it’s fun, as we join him and his small body escape or hide through the most grueling and graphic scenarios that other characters won’t be lucky enough to survive. The two men come face to face multiple times, and Roger deals with Clas in different and hilarious ways. And besides his psychological issues he’s still a smart guy – for most of the time he knows how to hide his tracks. Surprisingly, the death-defying scenarios aren’t the most ludicrous parts of this plot – the subplot concerning Diana made me eyes roll. This is a movie drenched in grossness that I feel guilty for liking it, but I do.