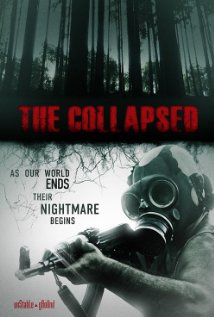 The world of low budget genre films seems proliferated by three different types of films, zombie films, one room/house supernatural thrillers, and apocalyptic end of the world set pieces. With so many out there it truly is difficult to make something original and enticing for fans of the genre. Canadian Filmmaker Justin McConnell brings us his take on the apocalypse with The Collapsed, released on DVD from Anchor Bay entertainment.

The Collapsed is the story of a family after a mysterious infection has turned most of the world against each other. Trying to stay together and lie low while cannibals/murders roam the streets the Weaver family, consisting of Father Scott (Fantasia), Son Aaron (Vieira), Mother Emily (Moule) and Daughter Rebecca (Ross), decide to head north out of the city back to Dover’s Bend, the country home where they used to live, to find out if the missing member of the family Daniel is still alive. One sleepless night spent in an abandoned subway station later the family finds a car and takes off for Dover’s Bend. An altercation in a gas station which sends the family scrambling to the woods for refuge, which ends up costing them dearly. As the intrepid survivors soldier on the lines between reality and fiction blur as we get closer to discovering the truth behind everything.

As a film The Collapsed is a bit of a mixed bag. Clearly there is talent behind the camera with Justin McConnell as the film looks way better than the $40,000 budget would allow you to think it should be. Not every performance works, I feel the mother and daughter do not come off as strong with Moule’s performance striking as very wooden in moments, but Fantasia’s lead performance is quite strong and keeps the film together. The material isn’t anything we haven’t seen before and thus sometimes seems derivative, but it also has sequences that are extremely effective. Not a genre defining film by any means, The Collapsed still delivers enough to place it above a lot of the dreck that can come from the genre.

The DVD is technically sound with an excellent sound mix and crisp picture. The one thing that pushes the DVD over the top, maybe even into the “must buy” category is the superb hour long making of documentary included on the disc. This is an excellent documentary of how a low budget indie gets made in little to no time and is something that aspiring filmmakers should benefit from viewing. The disc also features two commentary tracks with a director/producer track and another track featuring lead actor Fantasia. A series of television interviews from Space, G4 and Naked News, a music video and the traditional trailer gallery are also included.

While The Collapsed would have teetered around the mild recommend level if this were a theatrical review, the hour long documentary really does push this firmly into the recommend category as a DVD purchase. The Collapsed is available now at most retailers.