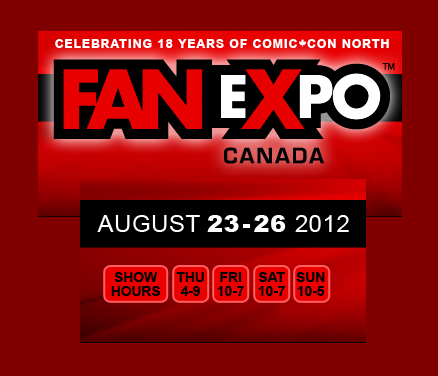 So another Fan Expo is in the books and it’s time to do some reflecting. This year was my first time with a media pass for the fest and thus I attended two of the four days, Thursday night and Sunday afternoon. Thursday became my walkabout day as the main hall was pleasantly less crowded and easy to maneuver, while Sunday was a work day as I attended some panels and conducted some interviews. The interviews will be along very shortly but for now we’ll start by focusing on Day 1. 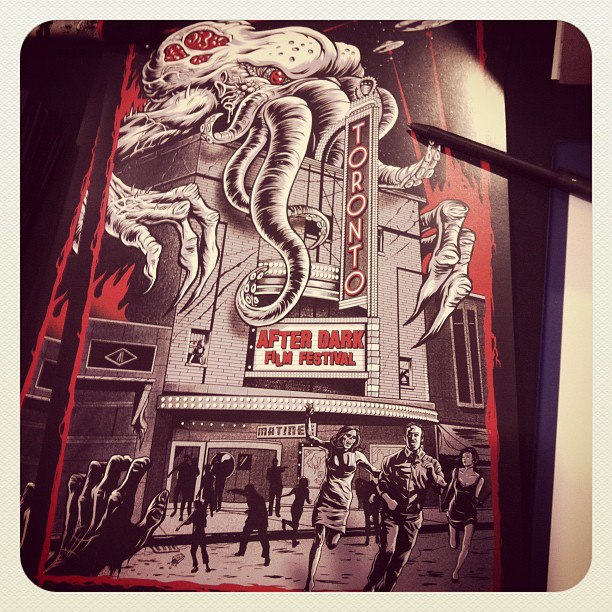 My first stop after attaining my pass was to go directly to visit my great friends at the Toronto After Dark Film Festival and find out what their first 10 films announced for the 2012 festival would be. The announcement should be live online at the link above by the time you read this, but at this time it was still under wraps. I’ll simply state that this is an extremely strong first wave lineup, and it contains a lot of films that I’ve been tracking for a while. Adam Lopez and company have not failed to raise the bar once again. On top of this, Toronto After Dark has released a limited edition T-Shirt/Poster by renowned artist Gary Pullin. It’s a beautiful poster and since Gary was gracious enough to sign all copies for free I managed to get an autographed copy that I’m sure will end up framed on my wall at some point. 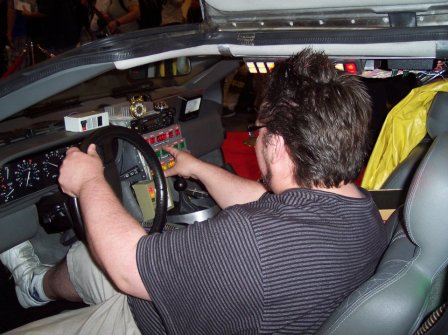 Next stop was the Anchor Bay booth where I acquired some goodies: a walking dead bag and some mini posters. It was there that I bumped into Justin McConnell, director of The Collapsed and curator of the Litttle Terrors Monthly Series that until recently was held at the east end rep cinema house, The Projection Booth.  But as of September 19th the series will be re-launching in its new home in the heart of downtown, the Rainbow Cinemas Carlton. To celebrate they have instituted a ‘Best Of Little Terrors’ tour that launched at Fan Expo with two sold out standing room only showings on Friday and Saturday. I will have more on this tour and the films associated with it in the near future.

Next I wandered through the multitudes of displays and vendors with standouts including the Frankenweenie exhibit, the free pic on a comic book cover from the DC booth and free Lego Darth Maul figure from, of course, the Lego booth. Along with running into some friends and getting my picture taken behind the wheel of an exact Back To The Future replica Delorean it was a fun day.

My second day started off with the Dead Before Dawn 3D panel with cast members, including Christopher Lloyd himself. Along with being fun and informative it was also research for what would come later. After another quick stop in at the Toronto After Dark booth to check in on the boys and the Underground Peep Show gang across the way, I was back on my way to Anchor Bay. After arriving there, and managing to snag a sweet full sized copy of the amazing Excision poster, I was lining up with some other critics to interview the cast and director of A Little Bit Zombie. The interviews were great fun and featured Casey Walker, Kristopher Turner, Shawn Roberts and the stunning Crystal Lowe. All of them were really great to talk to. Ending it off with a signed poster from the gang minus Crystal, who had taken off to go do her own shopping for graphic art (love this woman!), it was off to my next interview of the day.

Upon reaching the Dead Before Dawn 3D booth I noticed a very long line for autographs, probably spurred on by the film’s other star, Devon Bostick, autographing for free. Initially I was unsure how we would be able to fit the interview in. But the Writer Tim Dorian and Director April Mullen were very accommodating in talking to me as I had the interview booked with them but still managed to get in a few words from another cast member to boot. You should be able to read both those interviews very soon here on Entertainment Maven.

After some more roaming around and picking up some more schwag, I ended the day by sneaking into one of the smaller panels to get off my feet and hang with some friends. Earlier in the day I was almost bowled over by a passing Lou Ferrigno, so it seemed only fitting that my day would end standing shoulder to shoulder with Christopher Lloyd himself as he passed by. And with that my adventures at Fan Expo 2012 came to an end.