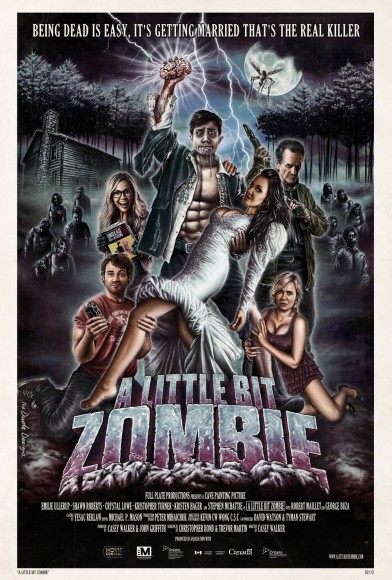 Hitting store shelves this week from Anchor Bay entertainment, A Little Bit Zombie has taken a different approach to releasing the film to the masses. After a completely self-financed and self-distributed theatrical run, the creators of the film have teamed with Anchor Bay Entertainment Canada to bring the film to home screens. And in the process, deliver the film to a wider audience than the limited engagements at individual theaters across the country would allow. But is the Blu-Ray worth your hard earned dollars?

A Little Bit Zombie starts off with Max (McHattie) and Penelope (Ullerup), a pair of zombie hunters that use a mystical orb to help track their targets, in the middle of a zombie swarm. After the carnage we follow, through first person camera, a mosquito full of zombie blood fly around in search of a target. We meet Steve (Turner), Tina (Lowe) his fiancé, Craig (Roberts) his best friend and upcoming Best Man, and Sarah (Hager) Steve’s sister who is also Tina’s unwitting Matron of Honor and Craig’s wife. The foursome is on their way to Steve and Sarah’s family cottage for a weekend of bonding and relaxation before the wedding. Our mosquito friend attacks Steve, repeatedly, which sets off the events of the film, with Steve slowly turning into a zombie and developing a lust for brains. In fact, Steve develops a certain hilariously grotesque response to even the word ‘brains’. The “family” must decide what to do and how to handle what is happening to Steve, all while Max and Penelope start tracking the strange readings that will lead them straight to him. Tina proves she is willing to go to extreme lengths to protect her man and her upcoming nuptials, dragging Sarah along with her, while Craig has the hardest time dealing with the situation. Everything leads to crazy confrontation with a deadly outcome. 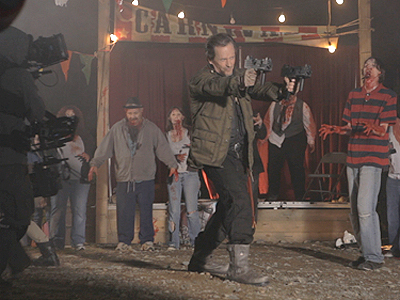 ALBZ shares a lot of similar themes with last year’s Zom-Com Deadheads, with the biggest difference being that ALBZ is not a road movie like Deadheads is. Both films incorporate a love story, but the female subjects of the love story could not be any further apart in personality. The script tries to walk the very fine line of letting us know exactly why Craig and Sarah do not like Tina, while still trying to make her endearing enough that the audience can see why Steve loves her so. As such, the script becomes very much hit and miss but it does pack some genuine laughs. The Cast of ALBZ is mostly up-and-coming Canadian talent, with McHattie, the grizzled veteran, chewing massive amounts of scenery. And while McHattie does steal the film, the foursome all put in fine performances, particularly Turner and Lowe as the engaged couple. The film is very light in tone and played for laughs throughout, and when it works it’s a lot of fun. The film attempts to go the practical effects route in the first half to greater effect than the CGI conclusion. Fans of the aforementioned Deadheads should check this one out as well.

As for the Blu-Ray, it’s loaded with extra features; a pleasant surprise for a film that was self-produced on a very tight budget. Anchor Bay has really gone all out with this set. The disc comes with a Feature Commentary featuring director Casey Walker and cast members Kristopher Turner and Shawn Roberts, a well made 30-minute ‘making of’ documentary titled “To Dream of Brains”, multiple behind the scenes featurettes, outtakes, bloopers, and full presentations of background segments shot for the film. It also includes a series of on-set video diaries from Director Walker and a fictional diary from Ullerup’s Penny. Overall a very satisfying set of special features.

Overall I feel that ALBZ works a lot more than it doesn’t. The exuberance and earnestness of the cast shines through, and the film benefits from this greatly. The disc is loaded with fun stuff and as such becomes a very attractive package that’s well worth purchasing. I can safely give A Little Bit Zombie a solid recommend.

Make sure to keep up with what’s going on at Entertainment Maven by liking our Facebook page and having updates delivered right to your Facebook News Feed. It’s the only way to stay on top of all of our articles with the newest blockbusters and all the upcoming films and festivals in Toronto, as well as our expanding Home Video coverage.