I’m a Bollywood kid. As a Canadian of Indian descent whose family is no stranger to the film industry there, I have been a fascinated witness to the journey that “Bollywood” has taken here in the West.  I’ve seen these films go from a source of ridicule for my classmates to being considered an actual cinematic form and a cultural heritage surrogate for ex-pats and first gens.

Lost among the Michael Jackson inspired dance routines (I dare you not to find the Thriller genesis of most Bollywood dance sequences) and blatant Hollywood plot rip offs are the hidden gems of Indian “parallel cinema” a tradition that took root around the time of French New Wave in the west.

Cameron Bailey should be commended for shining a spotlight on “hindie cinema” as he calls it, a new new wave of Indian film makers devoted to realism and expanding stylistic boundaries in this year’s City to City program at TIFF.

Leading the way are the folks at Anurag Kashyap Films (Full disclosure: Producer Guneet Monga is a friend and former client) whose gritty Gangs of Wasseypur wowed audiences at Cannes and is enjoying crossover mainstream success in India.

Without much further ado, here are the titles (photos and descriptions from http://www.tiff.net):

Mumbai’s King Manjeet Singh, India, World Premiere
Rahul roams the streets with his balloon-seller friend Arbaaz. These two kids escape the grim realities of their lives by gambling, roasting stolen potatoes, stealing an auto rickshaw for a joyride, and chasing girls. But soon Rahul has to “take care” of his violent father, who has forced him to live on streets. Starring Rahul Bairagi, Arbaaz Khan and Tejas Parvatkar.

Peddlers Vasan Bala, India, North American Premiere
The lives of a rookie cop, a streetwise orphan and a beautiful young ex-teacher collide explosively in the drug underworld of Mumbai in this edgy, powerhouse thriller that exemplifies the verve and excitement of India’s new independent cinema. Starring Gulshan Devaiah and Siddharth Mennon. 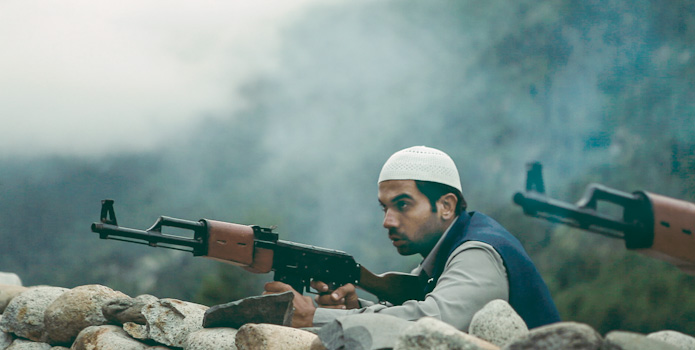 Shahid Hansal Mehta, India, World Premiere
Shahid is the remarkable true story of slain human rights activist and lawyer Shahid Azmi, who was killed in 2010 by unidentified assailants in his office. From attempting to become a terrorist, to being wrongly imprisoned under a draconian anti-terrorism law, to becoming a champion of human rights (particularly of the Muslim minorities in India), Shahid traces the inspiring personal journey of a boy who became an unlikely messiah for human rights, while following the rise of communal violence in India. This story of an impoverished Muslim struggling to come to terms with injustice and inequality, whilerising above his circumstances is an inspiring testament to the human spirit. Starring Raj Kumar, Prabhleen Sandhu and Baljinder Kaur.

Shanghai Dibakar Banerjee, India, North American Premiere
From the director of Love Sex aur Dhokla comes a searing political drama. Abhay Deol plays an investigator seeking the cause behind the assassination of a firebrand politician, complicated by the actions of the politician’s lover, played by Kalki Koechlin.

Ship of Theseus Anand Gandhi, India, World Premiere
In the first feature film from acclaimed Indian playwright Anand Gandhi, three disparate people — a devout monk stricken by illness, a blind woman whose sight is suddenly restored, and a stockbroker who sets out to combat the illegal international trade in human organs — are linked by an unknown connection as they follow their individual paths through the kaleidoscopic streets of Mumbai.

The Bright Day Mohit Takalkar, India, World Premiere
Yearning for meaning in his life, a coddled young man abandons his girlfriend and family to set out on a spiritual quest across India. Shot with sophisticated DSLR cameras and reflecting a new passion for personal filmmaking, The Bright Day finds images to chart a soul’s progress.